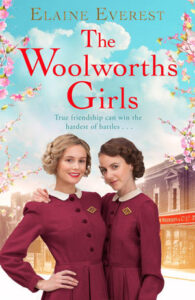 Today I’m sharing my thoughts about The Woolworths Girls by Elaine Everest, the first book in the popular series. Back when book 3, Wartime at Woolworths, was about to be published, I was asked to be a part of the blog tour and I said yes but I wouldn’t review as I wanted to read the series in order. On that occasion I shared a great Q&A with the author (reading it back I’m interested in the fact that this was never intended to be a series and also that book 4 was, at the time, thought to be the last Woolworths book).

I was then asked to be on the blog tour for book 4, A Gift from Woolworths and again my answer was the same so this time I shared Elaine’s top ten favourite things about the Woolworths series.

The next book to be released was book 5, Wedding Bells for Woolworths and I still hadn’t made a start on the series so I shared a guest post from Elaine about launching a book in lockdown.

Throughout all of this I have reviewed other books by Elaine Everest: A Mother Forever which is the prequel to the Woolworths books, The Teashop Girls and Christmas With The Teashop Girls, and most recently, The Patchwork Girls. However, when I saw that a new Woolworths book, The Woolworths Saturday Girls, is going to be published next year I knew it was time to embark on the series and I’m determined to read all of them before book 7 (as A Mother Forever is classed as part of the series) comes along.

Can romance blossom in times of trouble?

It’s 1938 and as the threat of war hangs over the country, Sarah Caselton is preparing for her new job at Woolworths. Before long, she forms a tight bond with two of her colleagues: the glamorous Maisie and shy Freda. The trio couldn’t be more different, but they immediately form a close-knit friendship, sharing their hopes and dreams for the future.

Sarah soon falls into the rhythm of her new position, enjoying the social events hosted by Woolies and her blossoming romance with young assistant manager, Alan. But with the threat of war clouding the horizon, the young men and women of Woolworths realize that there are bigger battles ahead. It’s a dangerous time for the nation, and an even more perilous time to fall in love . . .

The first in Elaine Everest’s Woolworths series, The Woolworths Girls is followed by the festive sequel, Christmas at Woolworths. The Woolworths Girls is the first in the series featuring Sarah, Maisie and Freda and all three are hoping to get jobs at the Erith branch of F.W. Woolworth & Co. Sarah is a quite confident young woman, at ease with all the role promises; Maisie is more brash but with a heart of gold; and Freda is only 17 and ready for her first taste of employment. At the interview, when they meet for the first time, they become firm friends.

I thought this book was absolutely wonderful in every way. Set in 1938, war is on the way and it was lovely to watch all the characters pull together as their lives changed in so many ways. Sarah’s nan, Ruby Caselton, plays a huge part in the story and she’s a real gem of a character, one of those people who seem to look after everyone who crosses their path. Her home is a hub for friends and family alike and it felt like you would never be without a place to lay your head or a warm hug if you knew Ruby. I also really liked Betty Billington, the girls’ supervisor and somebody who I feel has hidden depths.

The detail of the Woolworths shops in the 1930s was so interesting and it was fascinating to see behind the scenes and hear about the different counters (some of which I think had disappeared by the time I was shopping at Woolworths). Alan Gilbert is a trainee manager and he and Sarah take a shine to each other but before long war has broken out and their short time together must be put on pause. I really felt for this young couple, just embarking on life together but with the perils of life at war to contend with.

This is such a gentle story and yet the author hasn’t held back on putting her characters right into the heart of the action of the time. The outbreak of war brings its own challenges for Woolworths and the individual characters and no doubt the next instalment, Wartime at Woolworths, will portray that even more as the war progresses. I’m so glad I’ve made a start on this series. This first book is an absolute winner and a joy to read.