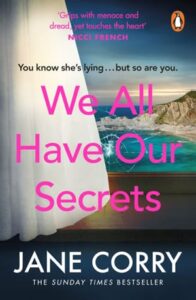 ShortBookandScribes #BookReview – We All Have Our Secrets by Jane Corry #BlogTour

It’s my stop on the blog tour for We All Have Our Secrets by Jane Corry, one of my favourite authors. My thanks to Ellie Hudson from Viking for the proof copy and the place on the tour.

Emily made one bad decision, and now her career could be over. Her family home on the Cornish coast is the only place where she feels safe. But when she arrives, there’s a stranger living with her father. Emily doesn’t trust the beautiful young woman, convinced that she’s telling one lie after another. Soon, Emily becomes obsessed with finding out the truth…

But should some secrets stay buried forever? I do love a Jane Corry book. It’s always a time to rejoice when a new one is on the way. We All Have Our Secrets is her latest and it’s an absolutely riveting story that I just couldn’t put down.

Emily is a midwife. An unfortunate situation at work leads her to flee London for her father’s home in Cornwall, at Willowmead House. When she gets there she is shocked to find Françoise answering the door. The young woman has been appointed by Harold, Emily’s father, as a carer and companion, but all Emily can see is Françoise worming her way into Harold’s life and making herself indispensable to him. She mistrusts Françoise and in turn, Françoise thinks Emily has neglected Harold.

The story is told from the point of view of each woman and I hated letting each viewpoint go, until I started reading the next one and got well and truly engrossed in that one too. This is an addictive read that I raced through, desperate to know what was going to happen next. The characters are so well-drawn, and I didn’t trust either of the women, such was the level of intrigue built up so efficiently by Corry. Interspersed between the alternating narratives are snippets of Harold’s war experiences and it just goes to show that we really do all have our secrets and some of them are hidden for a lifetime.

This is a family/domestic story with elements of a psychological thriller about it. I loved the details of life at Willowmead House and all the secrets that were gradually revealed. As always, it’s a brilliant, thrilling and twisty read from an author at the top of her game. I loved it. Jane Corry is a former magazine journalist who spent three years working as the writer-in-residence of a high security prison for men. This often hair-raising experience helped inspire her Sunday Times-bestselling psychological dramas, My Husband’s Wife, Blood Sisters, The Dead Ex, I Looked Away and I Made A Mistake which have been translated into over 16 languages and sold over a million copies worldwide. Jane was a tutor in creative writing at Oxford University; an RLF Fellow at Exeter University; and is a regular contributor to the Daily Telegraph and My Weekly magazine. We All Have Our Secrets is her sixth novel.