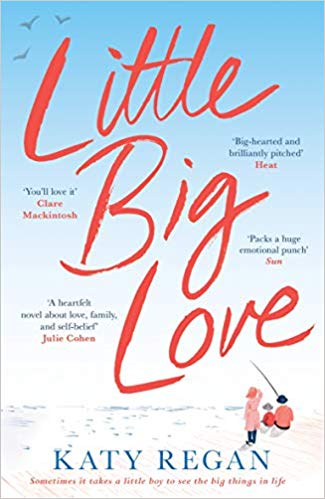 Little Big Man by Katy Regan was one of my top reads of 2018. I absolutely adored it so when Katy got in touch to ask me if I would re-post my review to promote the paperback edition I was delighted to do so. Since last year it’s had a name change and it’s now called Little Big Love. Same wonderful story though.

Liam Jones is the love of Juliet’s life. He was her brother’s best friend first, then hers, then the father of her son. In those shining weeks after Zac was born, she’d never been happier, and neither had Liam.
Until the night he disappeared without a trace.

Zac is now ten, and collects facts: octopuses have three hearts; the world’s heaviest man weighed over 100 stone; only three species of animal have a blue tongue. The one piece of information he really wants, though, is the truth about why his father left.

His family refuse to talk about that night but when Juliet inadvertently admits to him Liam is the only man she’s ever loved, Zac decides to find him and give his mum a second chance at happy ever after.

Oh my goodness, Little Big Love is the most wonderful book. It made me smile and it made me cry and it made me want to hug Zac. He’s the 10 year old boy who’s looking for his dad, the one that left before he was even born…didn’t he? The truth is there’s an awful lot more to it than that. His mum, Juliet, knows a lot more about his dad and he’s determined to get more facts so that he can try and find him.

Along with his feisty, tiny friend, Teagan, he sets out on the FDM (Find Dad Mission). These two kids were just the most fantastic creations. They balanced each other out perfectly and I actually felt proud of them, even though they’re not real and I’m only the reader. This is a book that got to the very heart of me and in fact, got hold of my heart and squeezed it tightly.

What I really liked about Zac and Teagan was that their voices were authentic. They didn’t sound too contrived, too childlike, but at the same time it was clear they were children and had a child’s way of looking at things.

I absolutely loved Juliet too. She had issues, but she recognised them and started to deal with them. She never stopped loving Liam, Zac’s dad, and as the book progresses we are drip-fed details about what actually led to Liam leaving.

This is a book that deals with grief, love, guilt, weight issues, bullying – these are some meaty topics but Regan approaches them with understanding and care.

The prose is simply beautiful. Zac has been sent home with a letter from school stating that he is over the weight he should be. Juliet reads the letter and this is what she thinks:

You want to know what hurts the most about getting that letter? The feeling that something beautiful and sacred has been soiled. Because to me, Zac has always been perfect – the only thing in my life that is – yet here’s this letter in black and white telling me that he isn’t; that the only thing that I’m proud of in my life isn’t even good enough.

I marked that passage just because it really moved me, but I could have quoted and quoted so many beautiful passages from this book. It’s a stunner of a read. It broke my heart and put it back together again many times and there was one scene in particular, close to the end, that saw me in tears. It’s an absolute beauty! Katy Regan was born in 1974 and brought up in the northern seaside town of Morecambe. She went on to study English and French at Leeds University where she became features editor of the student newspaper before moving to London. She wrote for various magazines and newspapers before becoming Commissioning Editor at Marie Claire magazine. Katy’s first novel, One Thing Led to Another, was published in 2009 and her second, The One Before the One, in November 2010. 2013 saw the publication of How We Met, closely followed by The Story of You in 2014. Little Big Love is her fifth novel and her first for Mantle.

Katy, who has one son, now lives in Hertfordshire.