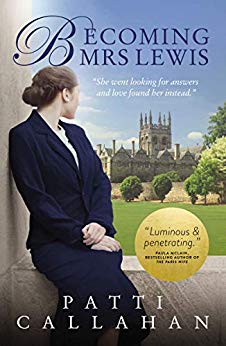 I’m delighted to be reviewing Becoming Mrs Lewis by Patti Callahan today. It’s ebook publication day and the paperback is published on Thursday, so if you like the sound of it then you can get your hands on it really quickly.

Harper Inspire sent out a beautiful blogger package containing a proof of the book, pen and paper, an envelope and a tea light, along with a handy tote bag. The reason for all this? Well, in the book Joy Gresham and C.S. Lewis exchange many letters and Harper Inspire wanted to return to the joy of letter writing by asking bloggers to hand-write a review and send it to them by snail mail. So I wrote an abridged version of my review and posted it off. Does anyone else find that when they hand-write their concentration wanders off somewhere and they make silly mistakes? Or is that just me? Anyhow, I managed to just about make it legible 😉 My thanks to Harper Inspire for providing the review copy of the book and the lovely extras.

I knew a little about C.S. Lewis and Joy Davidman/Gresham from a film I watched years ago, Shadowlands, so I was already interested in the story of the two writers and how they came to be married. But Becoming Mrs Lewis goes way beyond that with what I suspect must be a huge amount of research on the part of Patti Callahan.

I don’t want to go too far into the facts but Joy Gresham was an American, married with two young sons in 1950, when she entered into a correspondence with C.S. Lewis, the already very well known author, scholar and theologian. In doing so she embarked upon a course of action that would change her whole life. In the exchange of letters she discovered a man who would make her feel a way that her alcoholic, cruel husband could never do.

Joy’s ill health leads her to take time away from her home life and America and to travel to England where she meets Jack, as Lewis prefers to be known, and his brother, Warnie. Jack is her intellectual equal and their time together makes her incredibly happy, but Jack is holding back all the time, unwilling to take their friendship any further. A period back in America and then a return to England follows. The title, and history, tells us that Joy became Mrs Lewis but I’m not going to say any more about the plot. If you don’t already know what happens then it’s best you find out when you read the book.

Becoming Mrs Lewis is a beautifully written book. I so enjoy books that fictionalise fact in this way although it does seem so much harder to write a review. For instance, I can’t say really comment on the plot or the characters as they were not of the author’s imagination, but were real people and known facts. However, what I can say is that Callahan brings them to life so well, making the reader feel like an onlooker in the 1950s, not a reader in the 2010s.

I would be lying if I said I didn’t struggle at times with the writing style. But this is by no means a reflection or criticism of the author or her writing. We enter a very scholarly, literary world as soon as the book is opened and some of it was over my head. I don’t tend to spend time philosophising, I’m no writer and I’m no scholar. This is also a book set in the early 50s, partly at Oxford, and I have to say that the author portrays that era and that world effortlessly. I thought it read very much like a book written during that time, rather than a book written in the modern day but set then.

What I’m trying to say is that whilst I found some elements difficult to read, the greater part enthralled me. This is Joy’s story, narrated by her, and I found it compelling. She took a massive leap, leaving her husband and kids behind and coming to England, even if only for a few months initially. In the 1950s that was no doubt quite shocking. But thank goodness she did as it led to her Becoming Mrs Lewis.

Even though I knew what was to going to happen to bring the book to a close, I still found a tear escaping my eye. This is an epic love story in many ways, about a woman who was let down by her first husband and by the medical profession, but who eventually found true love and a greater peace. It’s a story of perseverance in more ways than one, of hope, of friendship, trust and ultimately, love.

If you’re a historical fiction fan, or someone who loves a bit of ‘faction’, then this is an ideal read for you. Patti Callahan has done a great job.

I’ll leave you with this quote from A Grief Observed, written by C.S. Lewis after the death of Joy Davidman, which I thought was quite beautiful.

She was my daughter and my mother, my pupil and my teacher, my subject and my sovereign; and always, holding all these in solution, my trusty comrade, friend, shipmate, fellow-soldier. My mistress; but at the same time all that any man friend (and I have good ones) has ever been to me. Perhaps more. Patti Callahan (who also writes as Patti Callahan Henry) is a New York Times bestselling author. Patti was a finalist in the Townsend Prize for Fiction, has been an Indie Next Pick, twice an OKRA pick, and a multiple nominee for the Southern Independent Booksellers Alliance (SIBA) Novel of the Year. Her work has also been included in short story collections, anthologies, magazines, and blogs. Patti attended Auburn University for her undergraduate work and Georgia State University for her graduate degree. Once a Pediatric Clinical Nurse Specialist, she now writes full time. The mother of three children, she lives in both Mountain Brook, Alabama, and Bluffton, South Carolina, with her husband.