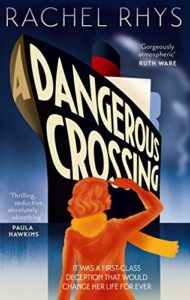 I’ve been looking forward to reading this book and it didn’t disappoint. I also loved the cameo by Cleo at Cleopatra Loves Books – what a thrill it must be to see your name in the midst of such a fabulous story. If you don’t know what it’s about then here you go:

1939, Europe on the brink of war. Lily Shepherd leaves England on an ocean liner for Australia, escaping her life of drudgery for new horizons. She is instantly seduced by the world onboard: cocktails, black-tie balls and beautiful sunsets. Suddenly, Lily finds herself mingling with people who would otherwise never give her the time of day.

But soon she realizes her glamorous new friends are not what they seem. The rich and hedonistic Max and Eliza Campbell, mysterious and flirtatious Edward, and fascist George are all running away from tragedy and scandal even greater than her own.

By the time the ship docks, two passengers are dead, war has been declared, and life will never be the same again.

Rachel Rhys is the pen name of a popular psychological thriller writer and so I thought I was in safe hands with this book, which is a departure from her usual fare, although I think there is always a weight of expectation when the true identity of the writer has already been revealed. Happily I thought this was a superb book and I savoured every minute I spent reading it.

The setting of an ocean liner is a glamorous one. Even those in tourist class like our heroine, Lily Shepherd, find the class barriers are broken down somewhat and there are less boundaries. Lily is going to Australia to be a lady’s maid but she finds herself mixing with the dangerously volatile Eliza Campbell and her husband, Max, from first class, along with Edward Fletcher and his sister, Helena, both of whom Lily becomes quite close to.

The idea of having the voyage take place over the month before the Second World War was declared is inspired. It gives the whole thing an edge, a feeling of the unknown future. The presence of Austrian Jews on the boat is very poignant as they were fleeing what we know now to be total persecution.

I found this book to be an absolute joy to read. It starts with something that actually happens at the very end of the story and all the way through I was left guessing. I did partly work out one aspect of it but not the other and it was a bit of an “ohhhhh” moment as it suddenly dawned on me. That was very clever plotting and there were a few red herrings to throw me off the scent.

A Dangerous Crossing is not a murder mystery or crime novel, it’s a story of intrigue and social mores. The whole thing is just wonderfully written and we see every side of human life on that ship, with perfect characterisations.

This is a book of around 360 pages which is not huge, but it took me longer than normal to read. It’s quite a slow read but not in a bad way, more in a way of wanting to soak in every detail: Lily’s cream dress and the peach silk one she borrows from Eliza; the sights and sounds of the voyage and the various trips ashore along the way; the mixture of feeling enclosed and yet being free. I just wanted to drink it all in as if I was there with them all on the Orontes.

This is just a superb story, very classy, very glamorous and absolutely captivating.

With thanks to the publishers and Amazon Vine for the review copy. A Dangerous Crossing was published by Doubleday on 23rd March 2017.