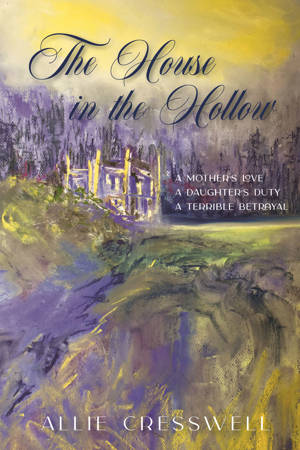 ShortBookandScribes #GuestPost by Allie Cresswell, Author of The House in the Hollow

I’m so pleased to welcome Allie Cresswell back to Short Book and Scribes with a guest post today. She’s been my guest twice before, talking about Mrs Bates of Highbury and The Widow’s Mite. I also featured an extract from Game Show and I reviewed Tall Chimneys, which I loved. The House in the Hollow is a prequel to that book.

The Talbots are wealthy. But their wealth is from ‘trade’. With neither ancient lineage nor title, they struggle for entrance into elite Regency society. Finally, aided by an impecunious viscount, they gain access to the drawing rooms of England’s most illustrious houses.

Once established in le bon ton, Mrs Talbot intends her daughter Jocelyn to marry well, to eliminate the stain of the family’s ignoble beginnings. But the young men Jocelyn meets are vacuous, seeing Jocelyn as merely a brood mare with a great deal of money. Only Lieutenant Barnaby Willow sees the real Jocelyn, but he must go to Europe to fight the French. The hypocrisy of fashionable society repulses Jocelyn—beneath the courtly manners and studied elegance she finds tittle-tattle, deceit, dissipation and vice.

Jocelyn stumbles upon and then is embroiled in a sordid scandal which will mean utter disgrace for the Talbot family. Humiliated and dishonoured, she is sent to a remote house hidden in a hollow of the Yorkshire moors. There, separated from family, friends and any hope of hearing about the lieutenant’s fate, she must build her own life—and her own social order—anew.

I wrote The House in the Hollow during 13 weeks of lock-down in the UK. We had been due to move house three days after lock-down was put in place, so with all our chattels in boxes what else was there to do but climb to my study—bare of books—and begin to write?

It is a prequel to Tall Chimneys. That book, spanning the century from 1910 to 2010, is set entirely in a remote country house in Yorkshire. Evelyn Talbot, the heroine, is marooned there by her family. Wars and political crises pass by in the outside world, making barely a ripple in the sequestered hollow where the house sits. Nevertheless, she is faced with her own difficult choices, experiences her own tragedies and finds that separation from the outside world can be both a blessing and a curse.

The house itself becomes a catalyst in the story, seeming to exert its own influence on Evelyn and her life. Having created such a place, I had begun to ask myself what its origins might have been. Who built it and why? And why choose such a hidden location? Who else might have lived within those grey, lichen-covered walls before Evelyn Talbot did?

The House in the Hollow is the result of these queries and answers at least some of them. In 1811 another Talbot daughter—Jocelyn—finds herself taken there and left to cope with the situation life has foisted upon her. Whereas Tall Chimneys is a linear story—proceeding chronologically from beginning to end—The House in the Hollow flips backwards and forwards in time. The reader watches Jocelyn struggle with and eventually reach some kind of peace with her situation at the concealed house, but is also granted an account of what events brought her there.

Since writing the book what has occurred to me is the link between its story and the lock-down. Jocelyn Talbot is as effectively locked down in her Yorkshire house as we all were in ours. She is separated—as we were—from family and friends. Her life shrinks to its essentials, as ours did. What she finds, in that reduced, inner-space, is surprising. For its day, it was radical, even shocking. What was it? Ah, to find that out, you’ll have to read the book.

Don’t delay, though. For just this week both books are available at bargain prices.

She has been a print-buyer, a pub landlady, a book-keeper, run a B & B and a group of boutique holiday cottages.

The House in the Hollow is her eleventh novel.