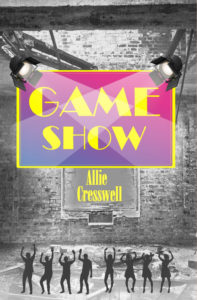 Welcome to my stop on the blog tour for Game Show by Allie Cresswell in which I will be sharing an extract from the book with you. Thank you to Rachel Gilbey from Rachel’s Random Resources for the place on the tour.

It is 1992, and in a Bosnian town a small family cowers in their basement. The Serbian militia is coming – an assorted rabble of malcontents given authority by a uniform and inflamed by the idea that they’re owed something, big-time, and the Bosnians are going to pay. When they get to the town they will ransack the houses, round up the men and rape the women. Who’s to stop them? Who’s to accuse them? Who will be left, to tell the tale?

Meanwhile, in a nondescript northern UK town a group of contestants make their way to the TV studios to take part in a radical new Game Show. There’s money to be won, and fun to be had. They’ll be able to throw off their inhibitions and do what they want because they’ll all be in disguise and no-one will ever know.

In a disturbing denouement, war and game meld into each other as action and consequence are divided, the words ‘blame’ and ‘fault’ have no meaning and impunity reigns .

Game Show asks whether the situation which fostered the Bosnian war, the genocide in Rwanda, the rise of so-called Islamic State in Syria and the ethnic cleansing in Myanmar could ever happen in the West. The answer will shock you.

When I wrote Game Show the reality TV concept was very new. Only the Japanese show Endurance had really begun to explore it. I had to create a show which was shocking and uninhibited, which would test contestants to the limit but which would still be achievable over six or seven hours, in a studio setting with a live audience and on a low budget.

The show invites an audience of about 200 the chance to become contestants, and to begin with they all participate. Gradually they are eliminated, as the games reach further heights of abandon and the contestants are encouraged to enter fully into whatever premise the show has presented them with.

Here, the show has a Native American theme.

With a fanfare, the first game commenced. Leo hurried to the centre of the studio where an enormous open tepee had been lowered from above. The audience in its entirety – perhaps two hundred odd members – swarmed down from the seating area and gathered around him where he sat cross legged upon a raised dais draped with the hide of an enormous animal. Squaws and braves, scantily clad, joined them, bearing Native American percussion instruments, feathered sticks and weaponry. The searing light of a vast, sun-baked plain mellowed into the golden glow of a sunset, and inside the tepee a fiery glow flickered, evoking the roasting of the day’s kill. As the light faded to a suggestive gloaming, the beat and thrust of a subdued but rhythmic drumming became louder. The squaws and braves began to move their bodies to it, encouraging the participants to join them. Chief Leo rose from his dais and engaged individuals in dance movements, turning from one to another, passing amongst them with a touch. Soon everyone stamped and stepped to the primal rhythm, bending and stretching, leaping and crouching, improvising on the theme by brandishing imaginary weapons, skulking like prey, pouncing, killing, hollering war-cries in tongues. They were melded into the tribe with shared belonging. As the moments passed, the sunset light faded and the firelight intensified, illuminating from the centre the frenzied, glowing bodies, glinting off damp skin, and throwing weird shadows around which seemed to add insubstantial figures, like ghostly ancestors, conjured by the power of the dance.

…… Now, the contestants which remained had been stripped down to the minimum of clothing, their initial masks and disguises pared away as they took on the roles provided for them within the Game Show context. The lights had been dimmed in all the peripheral areas of the studio while its centre bathed in a reddish, sanguineous light.  An enormous, shallow, saucer-shaped platform about twelve yards in diameter occupied the centre ground. Within it, towards the back, in the semi-gloom, a bulky mass, draped in what appeared to be the thick pelt of some indeterminate prairie animal lay on its side with its back to the audience.  Its size, its shape, its attitude and texture suggested powerfully a recently slain beast, killed by the tribe, which, now, in the seating area, whooped and hollered in the triumph of their vicarious kill. The camera zoomed closer. The animal’s flanks quivered, or appeared to do so, and a stream of vapour followed by a gush of red, slithering, moist seeming-entrails issued from an opening out of view. The lurid effluent continued to pour forth from the animal, running into the bowl of the platform; blood, it seemed, carrying in its stream organs in different sizes, blubbery and gelatinous; intestines – slithering like snakes; meat in roughly hewn chunks, offal – gathering into a slick pool in the centre. The contestants took in the scene; one young girl screamed, her mouth a gash of alarm, and was led away before she became hysterical. Some looked horrified, others determined; not one looked in any way detached. Then the game commenced with the long note of a prairie cry. The contestants, previously briefed, hurled themselves onto the platform, into the turgid flow. They grappled for the prized pieces of meat and entrail, slipping in the brownish-red effluent, rolling and sliding on the awkward, bowl-shaped terrain, struggling to hold in their hands the slimy, rubbery organs. The relentless drums once more thumped out an insistent beat. Disembodied voices of tribal elders chanted and cried encouragement and the tribe in the seats cheered them on, as though they would really feast on the kill. The vocal accompaniment to the grisly competition spoke of urgent, unsatisfied hunger. The meat – paint soaked sponge – soon began to disintegrate in the melee and the contestants became more frantic in their efforts to secure it. There was some physical confrontation between contestants, eagerly encouraged by the audience and the crew.  Some even abandoned the attempt to collect the dubious prizes to tussle and fight one another; romping and roiling on the charnel. Their clothes, few enough, were soaked in the red liquid, plastered wetly onto bodily contours, their skin stained, slick and raw. As they abandoned all inhibitions it was as though, in the conflict, their humanity was being stripped away, like skin from their flesh, revealing their savage, animal essence. I have been writing stories since I could hold a pencil and by the time I was in Junior School I was writing copiously and sometimes almost legibly.

​I did, however, manage a BA in English and Drama from Birmingham University and an MA in English from Queen Mary College, London. Marriage and motherhood put my writing career on hold for some years until 1992 when I began work on Game Show.

​In the meantime I worked as a production manager for an educational publishing company, an educational resources copywriter, a bookkeeper for a small printing firm, and was the landlady of a country pub in Yorkshire, a small guest house in Cheshire and the proprietor of a group of boutique holiday cottages in Cumbria. Most recently I taught English Literature to Lifelong learners.

Nowadays I write as full time as three grandchildren, a husband, two Cockapoos and a large garden will permit.