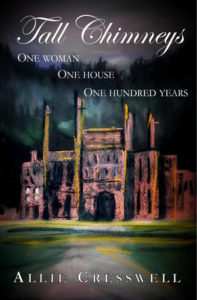 I’m so pleased to be taking part in the blog tour for Tall Chimneys by Allie Cresswell today. Thank you to the author and Rachel Gilbey from Rachel’s Random Resources for the review copy and the place on the tour. As soon as I heard about this book I thought it was going to be my kind of book. I’m reviewing it today so read on to see if I was right.

First of all, let’s see what the book is about:

Considered a troublesome burden, Evelyn Talbot is banished by her family to their remote country house. Tall Chimneys is hidden in a damp and gloomy hollow. It is outmoded and inconvenient but Evelyn is determined to save it from the fate of so many stately homes at the time – abandonment or demolition.

Occasional echoes of tumult in the wider world reach their sequestered backwater – the strident cries of political extremists, a furore of royal scandal, rumblings of the European war machine. But their isolated spot seems largely untouched. At times life is hard – little more than survival. At times it feels enchanted, almost outside of time itself. The woman and the house shore each other up – until love comes calling, threatening to pull them asunder.

A century later, a distant relative crosses the globe to find the house of his ancestors. What he finds in the strange depression of the moor could change the course of his life forever.
One woman, one house, one hundred years.

Like the sound of it as much as I did? Then it’s available now from Amazon UK and Amazon US.

This is the story of one woman and one house over the course of one hundred years. Like so many country houses, the time after the First World War was very difficult and sometimes led to the complete collapse of a way of life. That and death duties effectively crippled the families. The protagonist in Tall Chimneys is a woman trying to avoid this almost inevitable collapse and what we are reading is her memoir.

This book immediately appealed to me as it’s right up my street. I love books where houses are as much of a character as any person and I like books that give some social history. However, I’ll be honest here and say I wasn’t sure I was going to like it when I started it. I wasn’t sure I could engage with the characters, it started off with rather a strange, unsettling storyline and I had a bit of trouble getting into it.

But the more I read the more engrossed I became in the life of Evelyn Talbot who has an unbreakable connection with her family home. As the youngest child she has no real right to it but yet she is the one who is indelibly bound to stay there. I loved Evelyn. She’s so strong and yet so naive in her remote country home away from all that is modern and changing the world in the 1930s and ’40s.

And yet, Tall Chimneys does have the world outside brought to it as the abdication crisis in 1936, the Second World War, rationing and more all have their impact on Evelyn and the house. The inclusion of these important events really added to the social history feel of the story.

Evelyn was born in 1910 and the story comes to a close in 2010 but the whole of that time is not covered as I was initially expecting. But it does cover the most eventful years in her life. It reminded me a bit of Diary of an Ordinary Woman by Margaret Forster in that it takes in the life of a woman with all its trials and tribulations, sometimes mundane and sometimes amazing.

Tall Chimneys is not a book to be rushed. At 417 pages it’s quite detailed and involved and I was sad when it came to an end. I found myself thinking about it afterwards, still caught up with the lives of these characters and the house that, whilst increasingly rundown, still captured my imagination and made me wish I could visit it in real life. The descriptions of it were such that I could absolutely imagine how it looked, in its own valley, the kitchen that Evelyn spent most of her time in, and the gatehouse which was so important to her.

Allie Cresswell’s writing is so descriptive, so moving, so involving. She writes a wonderful love story and a truly rotten villain. It’s a sweeping epic of a book and I ended up loving it. She has two grown-up children, one granddaughter and two grandsons, is married to Tim and lives in Cumbria, NW England.

Tall Chimneys is the sixth of her novels to be published.