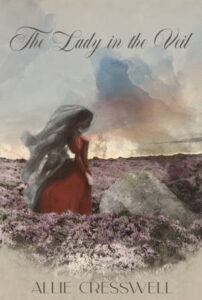 ShortBookandScribes #Extract from The Lady in the Veil by Allie Cresswell

I’m so pleased to be able to share an extract from Allie Cresswell’s latest book, The Lady in the Veil, with you today. It’s another book about the Talbot family (Tall Chimneys and The House in the Hollow being the previous books) but it also works as a standalone read.

These are the UK and US purchase links.

What secrets hide beneath the veil? When her mother departs for a tour of the continent, Georgina is sent from the rural backwaters to stay with her cousin, George Talbot, in London. The 1835 season is at its height, but Georgina is determined to attend neither balls nor plays, and to eschew Society. She hides her face beneath an impenetrable veil. Her extraordinary appearance only sets off gossip and speculation as to her identity. Who is the mysterious lady beneath the veil?

The Lady in the Veil continues the story of the Talbots in The House in the Hollow but stands equally well alone.

The first chapter of any book is always the hardest to write. On the other hand, it is probably the chapter that gets the most worked-over, edited and honed. Consequently, it is usually the one of which the author is most proud!

My latest novel, The Lady in the Veil, is a sequel to The House in the Hollow (although both stand alone). In the earlier book Yorkshire, with its vast, untamed moors, forms a powerful setting, and I wanted to root this later book there, even if most of the action takes place elsewhere.

I also wanted to introduce the idea of renewal, of removing something old—even if in a seemingly cruel way— so that new growth can come. The title of the book conjures the idea of a lady languishing beneath the burden of her anonymity. I wanted to foreshadow the notion of it being stripped away; that this might be violent but could also be beneficial.

It used to be a rural tradition to burn heather from the moors. Old, woody growth is removed, enabling new shoots to come. Although wildlife suffers in the short term, in the long term it is benefitted by the abundance of fresh greenery and habitat. Nowadays, however, this practice is frowned upon as being environmentally unfriendly and also—because of climate change—dangerous. Wildfires are a shocking but sadly common phenomenon. In 1835, however, the environmental calamity we now face was undreamed of.

They were burning the heather on the moor. They did it every year, different half-acre patches, to do away with dead wood and encourage new shoots to come. In very early spring, before the snowdrops had faded, they chose a day. They chose it by some in-bred instinct, without consultation or pre-arrangement. It was a day marked on no calendar other than the one that every moorsman had written on his soul, when the colour of the air, the smell of the sky, the taste of the wind told him that the day had come. It must be a windless day—although never, on the moor, was there a day entirely without wind—when the black peat still sucked and oozed with snowmelt but the scrub was dry.

Inscrutable, monosyllabic Yorkshiremen—ragged, broken-booted, oaken-hearted—shambled out from scattered farmsteads and lowly hovels to surround the doomed area. They leaned on their shovels, eyeing the sky, the scrub, each other. Then three or four on the windward border bent and stuffed rags amongst the bare branches of heather, gorse and juniper and brought their tinderboxes within the lee of their bodies to set the rags aflame.

Instantly—before the heat, before the smell—came the noise; the crackle and fizz of wind-dried wood as the fire took hold. The land roared, the plants cried out, they zizzed and spat and hissed and snapped. The flames, at first, could not be seen. It looked as though the branches withered and crumbled from within, their sage-green and grey-brown stalks disintegrating to dust in the air. Wizened berries boiled their last vestige of juice in sticky, resentful globules. Old leaves curled and dissolved to ash. The only sign of heat was the mirage that hovered over them; oily, scented with rosemary and thyme. It rose up into a film that distorted objects seen through its lens, wild imaginings brought to life, ghosts and spectres, the Angel of the Lord in the burning bush. Then came the heat, a hot, singeing breath that made the men step back and wipe their brows and grip their shovels. The translucent fumes became tongues of flame, an orange-magenta-purple-blue miasma sweeping across the brush and furze. Last of all came the smoke—acrid, white—rising in a tower above the flame-ground, carrying ash and sparks and white-hot filaments of tinder.

Suddenly, things began to move. The men, with surprising alacrity, leapt over tufts to extinguish rogue outbreaks of flame. They hefted their shovels again and again on the crisping undergrowth and spongey ground. Rodents and rabbits scattered, bursting out from where they had been cowering, their fur scorched, their ears back. Birds wheeled above their old nest-sites and screamed their dismay. Creatures that could neither run nor fly were rendered, instantly, to cinders.

A hundred yards away from the inferno, two women stood and watched. Their clothing—good, but not ostentatious in style—and their elegant bearing marked them as ladies of a certain quality; they did not come from the cottages that ran, raggle-taggle, along the periphery of the moor. Of the same height and build, they might have been sisters, but whatever similarity or discrepancy there was between them was impossible to know, for one of them was thickly veiled.

Allie was born in Stockport, UK and began writing fiction as soon as she could hold a pencil.

Allie recalls: ‘I was about 8 years old. Our teacher asked us to write about a family occasion and I launched into a detailed, harrowing and entirely fictional account of my grandfather’s funeral. I think he died very soon after I was born; certainly I have no memory of him and definitely did not attend his funeral, but I got right into the details, making them up as I went along (I decided he had been a Vicar, which I spelled ‘Vice’). My teacher obviously considered this outpouring very good bereavement therapy so she allowed me to continue with the story on several subsequent days, and I got out of maths and PE on a few occasions before I was rumbled.’

She went on to do a BA in English Literature at Birmingham University and an MA at Queen Mary College, London.

She has two grown-up children, two granddaughters and two grandsons, is married to Tim and lives in Cumbria.