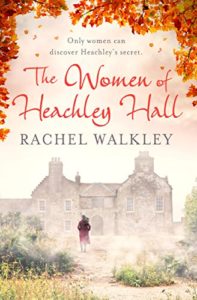 I’m delighted to welcome you to my stop on the blog tour for The Women of Heachley Hall by Rachel Walkley. I was particularly keen to sign up as this was a book I was really looking forward to reading. Thank you to JB from Brook Cottage Books for the place on the tour. Along with my review, I also have a short extract and a fabulous giveaway for you today, so read on!

Miriam has one year to uncover an unimaginable past and a secret that only women can discover.

The life of a freelance illustrator will never rake in the millions so when twenty-eight year old Miriam discovers she’s the sole surviving heir to her great-aunt’s fortune, she can’t believe her luck. She dreams of selling her poky city flat and buying a studio.

But great fortune comes with an unbreakable contract. To earn her inheritance, Miriam must live a year and a day in the decaying Heachley Hall.

The fond memories of visiting the once grand Victorian mansion are all she has left of her parents and the million pound inheritance is enough of a temptation to encourage her to live there alone.

After all, a year’s not that long. So with the help of a local handyman, she begins to transform the house.

But the mystery remains. Why would loving Aunt Felicity do this to her?

Alone in the hall with her old life miles away, Miriam is desperate to discover the truth behind Felicity’s terms. Miriam believes the answer is hiding in her aunt’s last possession: a lost box. But delving into Felicity and Heachley’s long past is going to turn Miriam’s view of the world upside down.

Does she dare keep searching, and if she does, what if she finds something she wasn’t seeking?

Has something tragic happened at Heachley Hall?

‘Are you sure you’re alright being here alone?’ Ruth asked for the umpteenth time, as I stood at the kitchen window: my favourite viewing spot. ‘We’re doing really well on the cleaning. There’s no need to unload anything in the dark, just leave it in the van until tomorrow. And don’t forget, I’ll be back in a couple of weeks to visit. Half-term.’ She put her arms around my shoulders and squeezed them.

‘Sure.’ There was no point lamenting the solitary nature of my occupation. It wouldn’t do me any good to paint myself as a failure before I’d spent one night in the house.

‘I can’t believe your aunt left it to you without explanation. Something has to be out there to explain it all. A missing letter? ’ Ruth picked up a dishcloth and scrubbed a mark on the worktop. Her boundless energy was infectious and I returned to wiping down the windowpanes.

‘I’ve been over it all countless times in my head, read the will over and over, and there isn’t a clue to her reasons why anywhere.’  I chased a smudge of something around the glass, never quite removing it.

‘Nothing in her personal effects in the nursing home?’

I shrugged. ‘Possibly, but according to Mr Porter it’s all gone.’

I do love a book where a house is central to the story. I always think there’s so much that can be uncovered and discovered about its past. So you can see why I was so keen to read The Women of Heachley Hall.

Miriam is a 28 year old illustrator living in Chelmsford. Until, that is, she inherits her late great-aunt Felicity’s mansion house, Heachley Hall in Norfolk. Unfortunately, it’s in a bit of a state and although it’s habitable, it’s far from ideal to live in. But live in it Miriam must, for a year and a day in fact, if she is to fully inherit the place. Why Felicity placed such a demand on her is something that keeps Miriam occupied for much of the novel. What is the significance of a box that she knows Felicity took with her to the care home where she ended her days? And what is it about handyman/gardener, Charles, that both intrigues and puzzles her?

Well, to find all that out you need to read the book because I’m not going to tell you. What I will say is that I found this to be a book of two halves (or maybe three thirds, but you know what I mean). The beginning of the book is a little slow and drawn out. I wanted more to happen than Miriam getting her cupboard doors sanded down (not a euphemism!). I was as frustrated with her lack of progress as she was. There were things happening around the house that hinted at something much more and grrr, I wanted to know what! But then…..well, it took off and started to get really interesting. Secrets started to come to light and the house’s history started to unfold. I was intrigued by the little facts that were being revealed and wondering where the story would go next.

I then got to a bit where I actually said out loud, and rather incredulously, “what?!?!?”. I could hardly believe the turn events were taking and wasn’t sure how I felt about it, but what followed was beautifully written and perfectly executed and more than made up for what I felt was quite a lot of scene setting in the early parts of the story. I think it was quite a gamble writing something so unusual but the author pulls it off really well and I found myself smiling and rooting for the characters so much in that last third.

The Women of Heachley Hall is a lovely, mysterious tale of a woman, a house, long forgotten events and one major wowser moment! Born in the Midlands, Rachel Walkley grew up in East Anglia and is now firmly lodged in the North West of England. Her first writing achievement was her Brownie badge and after that she never let go of the dream of becoming of an author. Once a librarian and caretaker of books, she’s now a teller of tales and wants to share with you the secrets that hide in the pages of her books.