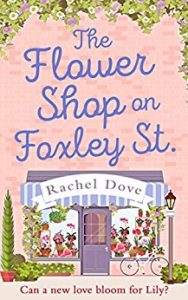 I’m so pleased to be taking part in the blog tour today for The Flower Shop on Foxley Street by Rachel Dove. I have a review for you, a short extract and also a fab giveaway. Thank you to HQ Digital and Brook Cottage Books for the review copy and the place on the blog tour.

So what’s the book all about?

Series: Westfield series – Can be read as a standalone.

A new love could be about to bloom for Lily in this bright, warm women’s fiction title that fans of Holly Hepburn and Cathy Bramley will love.

Lily Rose Baxter loves her little flower shop on Foxley Street and the freedom and independence from her family that it represents.

Lily can’t help but feel that something is missing from her life…, but when mysterious stranger Will Singer comes into her shop looking for the perfect bouquet of roses, all that could be about to change.

First of all, what a very appealing cover The Flower Shop on Foxley Street has. I have a bit of a thing about shops in books and this one just caught my eye straightaway.

It’s a really sweet story about Lily Baxter who has bought her parents’ flower shop. She’s been engaged to smarmy golf pro Stuart for six years and still a wedding doesn’t seem to be on the cards. And then one day Will Singer enters her shop and her life is turned upside down.

It took me a little bit of getting into this book but once I did I was quite caught up with Lily and Will, both of whom I thought were lovely characters although I did sometimes want to reach into the book and shake them. But that’s the nature of a romance book isn’t it? It tends to have to go wrong before it can go right.

Will has a bit of a secret going on and I saw it coming a mile off. But you know, it didn’t matter. This is the kind of book where you don’t have to think too hard, you just read it and enjoy it. It’s a light read, the kind where you know it will all work out in the end.

There is a subplot about Lily’s parents. Now they don’t have the flower shop to run they are drifting apart and getting on Lily’s nerves but at least it gives her an opportunity to make a stand for once. Lizzie and Irvin were an annoying pair – I liked them both a lot but they wanted their heads banging together!

This book is a pleasant and enjoyable read with a romance at its heart. I loved the interaction between Lily and Will which was portrayed perfectly. All in all I thought it was  charming, a feel good comfort read, one to snuggle up with.

Now read on for a short extract.

Will Singer looked every inch the thirty-two-year-old man he was. The bathroom mirror rarely did anyone any favours, but this particular winter morning it appeared to be magically channelling the mirror from Snow White in terms of stark clarity and downright truth. Who’s the hottest man of them all? Certainly not you, dude.

He had badly needed a shave. People were starting to comment on it, but the clean-shaven Will was not a great improvement. At least his dark stubble had detracted from the huge Kardashian-sized luggage wedged under his eyes. Without his hairy mask, Will felt naked, unable to hide.

Even worse was the fact that the lack of hair on his face left people free to roam over his other features, in particular the mop of hair sprouting from his head. He looked like Lionel Messi mixed with Mufasa the lion. It did well for them, but Will wasn’t sure it was such a great style for him. Any longer and he would have to buy an Alice band like Beckham. Start sporting a man bun. He was pretty sure the villagers had never seen a man bun. It might scare them enough to dust off the pitchforks and torches. He had a sudden vision of his uncle Archie dressed like Braveheart, rallying the twin set and mohair-clad villagers into action from atop a horse. ‘People of Westfield, we shall not lie down and die. The man bun must be destroyed!’

He chuckled to himself at his own humour. He would have to tell Lily that joke later.

So if you like the sound of this book then you can buy it from AMAZON UK or AMAZON US. It’s available in ebook only for the princely sum of 99p! Well worth it.