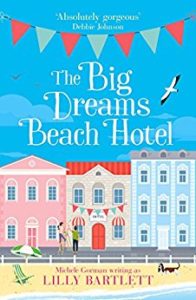 I’m so pleased to be sharing an extract from the new book by Lilly Bartlett with you today. It’s called The Big Dreams Beach Hotel and it’s a standalone book, not one of the Carlton Square books. Here’s what it’s all about:

Sounds like a perfect summer read, doesn’t it? Read on for the extract. This is a section from the beginning of chapter 2.

Lill raises her tiny hands with a showbiz flourish that catches everyone’s attention. Lill is nothing if not an attention-catcher. Her platinum bob shines out from beneath her favourite black top hat, and she looks every inch the circus ringmaster with her moth-eaten red tailcoat over her usual thigh-skimming miniskirt and white go-go boots.

This wouldn’t look at all unusual if she wasn’t pushing seventy.

Lill’s voice soars clear and strong above everyone else’s and the Colonel calls me Rose Dear. That man hates a nickname.

They’re all bunched together in our hotel’s decrepit bar, directly under the lurid green banner we used last year when the Colonel’s biopsy came back benign. At his age, that kind of thing deserves celebrating. I was the one who tore it taking it down, so it reads CON RATULATIONS. Story of my life, really.

They couldn’t be prouder of their surprise, though. Even the dog looks smug.

It’s an ambush, though I suppose I’ve been half expecting it ever since Lill let slip that they knew the date was coming up.

Three years back in Scarborough. Who’d have thought it?

It’s touching that they’ve done this, although I’m not big on surprises, which has made me paranoid for days. I even double-checked the restaurant this morning, but everything was normal – Chef barking orders at Janey and Cheryl. Janey and Cheryl rolling their eyes behind Chef’s back. Chef acting like he doesn’t know they’re doing it.

I should have thought to check the bar. It’s just beside reception through double doors in the wide entrance hall, but it’s never open this time of morning, unless we have a stag party in. And that hasn’t happened in yonks. Not even the Colonel uses it before evening. He’s got his own private whisky stash up in his room. He says he likes to keep his loved ones close.

‘For she’s a jolly good fellow…’ The Colonel’s voice trails off when nobody joins in. ‘I didn’t realise you were married, Rose Dear,’ he says. The ice in his glass tinkles as he sips.

Everyone stares at him as if we don’t hear his gaffs every day.

‘She’s not married, Colonel. She doesn’t even have a boyfriend,’ Janey says.

Her tone isn’t unkind. Just matter-of-fact. But ta for that reminder, I think.

‘It’s her three-year work anniversary, Colonel,’ Peter kindly reminds him. ‘Not a wedding anniversary.’ Peter reaches down to pet Barry, who’s starting to look bored with the whole event. Though it’s anyone’s guess what better offers a basset hound might have at eleven o’clock on a Tuesday morning at a seaside resort in the off season.

‘Righty-ho,’ the Colonel says. ‘Chin up, old girl, it might not be too late for you.’ He wanders out. We can hear the tap tap of his cane on the careworn parquet floor as it carries him off to his usual chair in the conservatory, where he likes to spend his mornings.

Colonel William Bambury always cuts a dashing figure, even when he’s half cut before lunchtime. Which is most days. His shirts are perfectly pressed and the crease in his trousers could slice through a joint of meat. After forty-five years in the Royal Marines, he knows his way around an ironing board. In summer his ensemble is khaki. He adds a green tweed jacket in cooler weather, and on occasions like today he pins his medals to the front.

Personally, I’d live in thermals and a winter coat if I were him, because I know he doesn’t put the heat on in his room. He says it’s because he likes the bracing air, but I know it’s to save money. We need whatever comfort we can spare for the guests.

I hope that has whetted your appetite. Call back on 26th August when I’ll be reviewing as part of the blog tour.

Here’s how you can buy the book:

Pre-order The Big Dreams Beach Hotel to land on your eReader on August 18th!

Kindle Unlimited subscribers will get it for FREE. You’re warmly invited to the Wedding of the Century with all your favourite friends. It’s the most vintage fun you’ll have this year!

To WIN a personally inscribed paperback of this gorgeous book, simply sign up here.

Winners will be randomly selected and notified on August 18th via the email used to sign up.