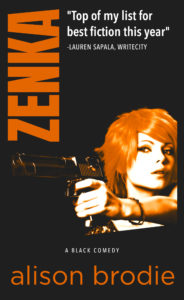 Posted on 9th November 2017 By Nicola

Today I am treating you to an extract from Alison Brodie’s new book, Zenka, which is getting rave reviews from other bloggers. Here’s what it’s about: Zenka is a Hungarian pole-dancer with a dark past.

When cranky London mob boss, Jack Murray, saves her life she vows to become his guardian angel – whether he likes it or not.  Happily, she now has easy access to pistols, knuckle-dusters and shotguns.

Jack learns he has a son, Nicholas, a community nurse with a heart of gold.  Problem is, Nicholas is a wimp.

Zenka takes charge.  Using her feminine wiles and gangland contacts, she aims to turn Nicholas into a son any self-respecting crime boss would be proud of.  And she succeeds!

Nicholas transforms from pussycat to mad dog, falls in love with Zenka, and finds out where the bodies are buried – because he buries them.  He’s learning fast that sometimes you have to kill, or be killed.

As his life becomes more terrifying, questions have to be asked:

How do you tell a crime boss you don’t want to be his son?

And is Zenka really who she says she is?

Sounds like crazy fun, doesn’t it? If you fancy buying yourself a copy then here are the links you need:

Olga Savchukis is a lying bitch.  She say I vill be taken care of.  I vill get good job in London.  Good job?!  She sells me to Romanians.  I kick man in balls.  I bite.  But I cannot get out.  Even vindows locked.  I know if I am injected I can never escape, NEVER.

Suddenly doors crash open and there is much shooting of guns.  After is silence.  A man with a face like crumpled McDonald bag takes us outside.  The other girls are like sleepvalkers.  We have to step over dead Romanians.

The man who saves us is Jack Murray – I am not allowed to tell who he is, but I can tell YOU because you are in Hungary and cannot sneak.  He is top gang boss in London.

He hates Romanians.  He says it’s very bad thing they do to girls.  The girls who escaped that night get jobs in bakery and supermarket.  Me?  I vill not leave Jack.

Remember the puppy, Yuki?  I am like that.  I follow Jack all around.  He says I am nuisance.  I offer myself to him.  I am virgin but he deserves me.  But he doesn’t vant me!  He says he is too old.  I say he is not too old.  He tries to ignore me.  But nobody can ignore Zenka Valentina Varga if she does not vant to be ignored.  Ha!

You saved my life, I tell him, now I am your guardian angel.  He rolls his eyes to heaven as if seeking patience from God, and says:  How can you be guardian angel ven you are only five foot two?  I say I am small but a grenade is also small.

I get job in Jack’s club, The Men’s Room.  I tell manager I do pole dancing.  (That is ven girl climbs up and down pole – I don’t make it sound sexy – but it is ven it is done right).  Me?  I try to turn upside down, and fall into a heap.  Now I am STAR performer!

I ver vigs, blonde, black, orange, pink, depending on my mood.  Job pays good vage and the customers throw money on the stage – not like other places ver the man puts money in girl’s panties with fingers – urgh!  If man touches me, I slap his face.  He is shocked but his friends laugh.

Jack tells me not to attack customers – it is not good for business, he say.  Yesterday I scratch customer because he hurts new girl.  Jack is angry with me, but then he goes outside and punches the customer.  So JACK can punch but I cannot scratch?  Ver is the justice in THAT?

Jack has bodyguards.  Lockjaw looks like Frankenstein.  Vince is tall but he never talk.  Billy is short and square and he talk too much.  He teaches me Cockney:

“Bollocks” is a man’s balls.  But if you say “Don’t drop a bollock” it means don’t make a mistake.  “I’m the dog’s bollocks” is ven man thinks he is the best.  Jack says this all the time.

I have to tell you. Ven Jack is angry, it makes me laugh.  He can be tough with men, but he cannot be tough with vomen.  He is like the father I never had.  He tells me to find good husband and I say, yes, yes, Jack, to shut his mouth.

My dearest friend.  Do you know ver Olga Savchukis can be found?  If you know this, tell me.  Then I can kill her.

How is the family?

Fifty miles away, at exactly the same time…

5*  “Top of my list for best fiction this year” – Lauren Sapala, WriteCity Alison Brodie is a Scot, with French Huguenot ancestors on her mother’s side.  She is a writer and animal rights activist.

Her books have been published in hardback and paperback by Hodder & Stoughton (UK), Heyne (Germany) and Unieboek (Holland).

Alison is now a self-publisher.  Here are some editorial reviews for her recent books:

THE DOUBLE:   “Proof of her genius in writing fiction”  -San Francisco Book Review.