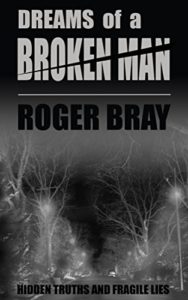 #extract – Dreams of a Broken Man by Roger Bray @rogerbray22

Today I’m delighted to be sharing with you an extract from Roger Bray’s book, Dreams of a Broken Man. First of all, here’s what it’s all about:

ALICE’s brother, ALEX, is convicted and imprisoned for the murder of his wife, HAZEL. Through the trial and failed appeals she stands by him as her own life spirals out of control. Finally, reaching the end of the last appeal, ALEX is still in jail with no hope left and ALICE is in a jail of her own. Depression and helplessness over her inability to help ALEX, and alone, because the process broke her marriage apart. As the reality of her life closes in around her a chance meeting gives her a glimmer of hope as a new ally, STEVE, helps her peel away the fragile lies and hidden truths holding the prosecution case together as they try to find out what happened to HAZEL. But the truth only reveals a deeper mystery and uncovers something more sinister than they first realised.

She slowly came around.

Hazel’s first thought was that she was sitting awkwardly. In small measures her mind began to clear until the realization of her situation brought her fully awake. It was dark, or at least that is what she first thought until she realized that the darkness was probably artificial and brought about by the black bag over her head. As she became more conscious and aware she began to see light, not much, small pin pricks. It was not enough to actually be able to see anything but it was enough to know that the light was not daylight. It was an artificial light, not too bright but enough that she knew that she was indoors.

Her arms were tied behind her, at the wrist and elbow. This pulled her shoulders back and pushed her breasts out. Her legs also pulled back and her feet, bare, removed from her boots were tied around the ankles, not to the legs of the chair and not to each other. They were pulled further back under the chair, tied to something behind her. She tested the bonds and found them tight, not uncomfortable unless she pulled against them, in time they would hurt but for the moment there was no pain.

Her mouth was gagged. Something hard and round was forced between her teeth and held by a strap around her head, she could breath around the edges of the ball and through her nose. She could breath, but she couldn’t talk or scream out. Hazel, took stock, a task of a moment: she was bound, gagged and was being held somewhere unknown; she was dressed apart from her boots and socks; she had a horrible chemical taste in her mouth, there was some sort of black bag over her head leaving her in almost darkness and seemed to concentrate the chemical smell.

Where was she, and who was doing this to her? She had no idea and only one name came to mind but in spite of herself she could not actually believe it for the moment.

Even though she was blinded by the black bag and her sense of smell was deadened by the chemical residue, her sense of hearing was excellent and through the material she listened in the silence for anything that might be able to reach her and make sense of her situation. She hoped that she might hear something, anything; she might hear birds, or machinery, children playing or aircraft if she was, as she suspected, as near the flight path for Eugene airport as Nicholas’s house was.

But nothing, it wasn’t that she couldn’t hear anything it was that there was nothing to hear, an absence of noise. No indeterminate noises in the distance, muffled by a wall, no outside noises at all.

But when there is nothing the smallest thing can be amplified.

No noise, but then something, what was that? It took her a moment to identify the deep breathing behind her, not breathing on her but behind, probably a couple of feet away maybe a little more. Or was she imagining it? Was there someone there, was there breathing or was it the sound of her own blood rushing through her ears?

That was when the panic rose in her and she found herself breathing faster and faster until snot began to dribble from her nose making breathing more difficult. Then the thought came to her that whoever was behind her didn’t care if she smothered to death because of the ball gag and her snot filled nose. She knew that if he had wanted to kill her she would be dead already, but the only person in the room that cared if she lived or died was her.

Her nose was starting to block and the cloth around it was starting to get wet and she knew enough to understand that she was on a downwards spiral, the more she panicked the harder it was to breath, the harder it was to breath the more she panicked. She forced herself to slow her breathing and take big breaths around the edges of the ball gag. With each slower breath her heart rate slowed and her breathing became easier, until she could breath almost normally through her nose.

There was a low chuckle behind her, the first real noise she had heard since she had woken up. In the sound of the laugh she almost thought that she could hear an approval. As though she had been set some sort of a test and had somehow, without realizing, passed it.

The chuckling stopped and the breathing, deeper now and clearer that she knew it was there, was directly behind her, had it not been for the black bag she would have felt the hot breath on her neck.

Two hands circled her stomach and rested there for a moment before moving up, pushing her jumper and bra up uncovering her breasts. She felt the panic rising again before she forced herself to breath normally but still, her eyes bulged unseen in fear under the bag as the rough hands cupped her large breasts before softly, one for each hand, rolling her nipples between thumb and forefinger.

Her nipples became erect and the hands were removed, as a final movement pushing her bra and jumper up further leaving her exposed to whoever was there. Soon she thought that she was alone again but then she heard a more rhythmic, urgent sound before the lights were turned off and she was left half dressed as she was, in silence and darkness.

Ooh-er! If you want to find out more about this situation that Hazel finds herself in then you can buy the ebook here. With thanks to Roger for providing the extract. My life to date is what compels me to seek a just outcome, the good will overcome and the bad will be punished. More though, I tend to see my characters as everyday people in extraordinary circumstances, but in which we may all find our selves if the planets align wrongly or for whatever reason you might consider.

Where it will take me I have no idea but I am going to enjoy getting there and if my
writing can bring some small pleasure into people’s lives along the way, then I
consider that I will have succeeded in life.

Personal fun facts:
I am married with three grown children and one grand daughter. I live with the love of
my life, my wife of thirty years and her overly cute cat who, maybe unknowingly but I
doubt it, saved my life by, for the one and only time, jumping on my lap and purring
his head off when I was at my lowest and the depression almost got me.