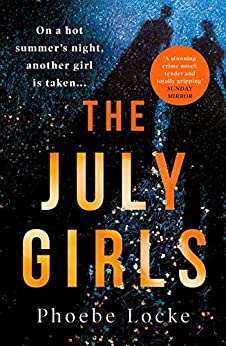 ShortBookandScribes #BlogTour #Extract from The July Girls by Phoebe Locke

It’s my stop on the blog tour for The July Girls by Phoebe Locke and I have an extract to share with you. I reviewed this book last summer upon hardback publication and you can catch up with my thoughts here.

My thanks to Antonia Whitton of Wildfire Books for asking me to be a part of the tour.

She left for work the morning of a terror attack in London, and no one’s seen her since. Was Olivia among the victims or did she meet a different fate?

Addie has a secret.

That same day, her dad came home covered in blood. Addie thought he’d been hurt in the attacks, but her sister Jessie found the missing woman’s purse in his room.

Jessie says she wants to help.

She takes a job as a nanny at Lex’s house, looking after his baby. But she’s not telling him the truth. And she’s getting a little too comfortable living Olivia’s life…

There is still no official confirmation of the total fatalities, though a government source earlier suggested that the number already exceeds twenty, with hundreds thought to be injured.

I slammed the door, shutting his voice out.

The flat smelled stale; the drip of the kitchen tap the only sound. The box of Pop-Tarts was still on the side, the discarded wrapping paper and my presents still on the table, along with the little cake in its box. I dropped my school bag on the kitchen table and walked in a slow circuit through the empty rooms. I ate cereal out of the box. I started and switched DVDs. I took out my homework book and laid it on the chipped coffee table, then didn’t look at it again. When I got hungry, I stood in front of the fridge, looking in, taking bites out of a block of cheese, the clingfilm peeled back.

It grew dark, me hunched in the weak glow from the TV, and eventually I got up to switch on the lights. The little red digits on the oven blinked at me through the open kitchen door. Eight thirty. I made toast. I burned toast. I listened as Mrs Klusak laughed at the TV. She’d given up watching the news about an hour before, and I tried to find the channel she was watching, tried to share the joke, but our TV only showed soaps and news, all sirens and raised voices.

I slept. I woke once, to a late-night quiz show on the TV with a pretty redheaded host who talked and talked and filled the silence. I turned over and looked around at the empty room, everything still wrong. I closed my eyes tight again and forced myself back into sleep, wishing it all away.

The sound of a key turning in the front door woke me the second time. I sat up, Jessie’s favourite scarf, which I’d wrapped myself up in, slithering to the floor. It was pitch black, the TV off. The door closed quietly and a breath of night air and smoke floated in to me.

‘Jessie?’ I called, but there was no answer. I stood up and wobbled over to the doorway, eyes still sticky with sleep and the fear growing again in my belly.

But it was Dad standing in the hallway, one hand still on the door. We blinked at each other, neither of us moving. ‘Hey, birthday girl,’ he said eventually, his voice coming out low and croaky. ‘Wotcha doin’?’

‘I was sleeping,’ I said, tears turning the words gluey and thick. ‘I was scared.’

I was too tired and confused to think about whether I’d be getting Jessie in trouble; the realisation that she still hadn’t come home dawning and drowning everything else out. ‘Dad,’ I said, starting to cry now, ‘the bombs—’ But he was already pushing past me into his dark bedroom, the smoky night smell and a faint trace of something ranker going with him. He didn’t turn the light on or  turn round as I followed him.

‘Dad, Jessie—’ I tried, and that did get his attention. His face was pale in the dark as he turned to look at me.

‘She’s not here?’ He was pushing his shoe off with the toes of the other, stooping to remove the second one. When I shook my head, he swore and fished his phone out of his pocket. She didn’t answer; I watched him throw the phone down on his bed as he pulled off his T-shirt.

Before I could say anything, he’d moved past me and into the bathroom, the door closing in my face and just that same strange, coppery smell left behind.

I usually did whatever he told me but instead I curled up on his bed and listened to the water patter into the plastic tray, willing his phone to ring from the foot of the bed. She would be sorry, and he would be angry, but everything would be okay again. That clenching feeling in my chest would go away and everything would be okay. I could hear the furious frothing of him washing his hair in there and I pulled his T-shirt closer to me, wanting to breathe him in; the warm, muggy Dad smell I knew, and not that dark, meaty scent he’d brought in with him. I lay back against his pillow, his T-shirt against my cheek, and fiddled with the hem of it, the way I did with my baby blanket when I was little, until Jessie had told me it was time to put it away.

My fingers touched a dry patch along the bottom of the T-shirt, a place where the fabric was stiff.

I looked down. Three roundish marks, one large, two small.

The water stopped running. I heard the curtain swoosh back, the wet plastic slap against the wall. The toilet flushed. I looked at the three spots. He came out of the bathroom with a towel round his waist and finally flicked the light on.

‘Did you hurt yourself?’ I asked, and he frowned. When he saw the top in my hands, the stained part held out to him, his face went taut. I saw a scratch on one of his cheeks, red and angry. ‘Was it the bombs?’ I asked, starting to cry properly this time. ‘Dad, was it the bombs?’

‘What?’ He came and sat down on the bed beside me, took the T-shirt from me. ‘Is that what you’re worried about? I was nowhere near the bloody bombs. Jessie won’t have been either.’

‘Oh.’ I tried to wipe my nose on the back of my hand, tried to swallow back my tears. He never liked it when we cried. But that night he just reached for his phone and checked it, then spun it round to show me a text: Jessica: Sorry. On way home now. There were scratches on his arm too, two raked lines near his wrist.

‘Then what happened to you?’

‘There was a fight,’ he said. ‘Two lads against another outside some club. I tried to break it up, they were really giving him a kicking.’

We looked at each other. My mouth had turned dry again. ‘Okay,’ I said.

‘Get into bed, Addie. It’s really late.’ His watch was next to me on the bedside table. Its face read 3.01 a.m. There were drying red flecks on the glass.

He picked up his phone again and left the room. I heard him filling the kettle, heard the pops as he pierced the plastic on a microwave lasagne.

And in the bathroom, I found what I was looking for. Balled up behind the toilet, smelling of that strange metal smell and sodden in my hands. His black jeans. My hands coming away red. Phoebe Locke is the pseudonym of full-time writer Nicci Cloke. She previously worked at the Faber Academy, and hosted London literary salon Speakeasy. She lives and writes in Cambridgeshire. Phoebe Locke is the author of two psychological thrillers, THE TALL MAN and THE JULY GIRLS.