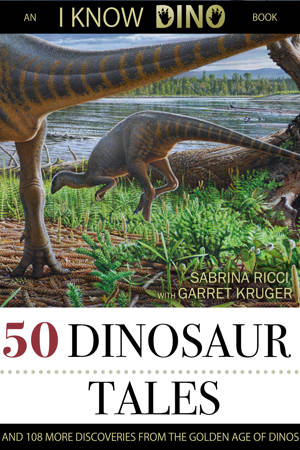 ShortBookandScribes #BlogTour #Extract from 50 Dinosaur Tales: And 108 More Discoveries From the Golden Age of Dinos by Sabrina Ricci with Garret Kruger @iknowdino @rararesources

Welcome to my stop on the blog tour for 50 Dinosaur Tales: And 108 More Discoveries From the Golden Age of Dinos by Sabrina Ricci. I have an extract to share with you today from this fun and interesting book. My thanks to Rachel Gilbey from Rachel’s Random Resources for the place on the tour.

“Gualicho takes a bite out of the ornithopod’s back as it runs away from her, causing it to stumble and fall. She jumps on top of the body and rips open its neck with her teeth. The ornithopod becomes still and limp.

Satisfied, Gualicho begins to feast. But, after only two bites, she senses something is wrong. She lifts her head and sees a Mapusaurus making its way toward her.”

Blending fiction with fact, 50 Dinosaur Tales imagines the way 50 newly described dinosaurs from the Triassic, Jurassic, and Cretaceous lived in their natural habitats.

Also included is a list of fun facts for each dinosaur story, and facts about 108 additional dinosaurs.

If you want to hear more about new dinosaurs as soon as they are discovered, listen to the weekly podcast I Know Dino.

50 Dinosaur Tales imagines the way 50 newly described dinosaurs from the Triassic, Jurassic, and Cretaceous lived in their natural habitats. I’ve learned a lot the past five years producing a weekly dinosaur podcast with my husband Garret, at iknowdino.com, and had a great time writing short stories about some of the most recently discovered dinosaurs based on what paleontologists know about them.

Below is an excerpt from the book—the story of Gualicho shinyae, a large carnivorous dinosaur that lived in the Cretaceous.

Gualicho shinyae is hot and sticky. She’s been wandering all morning in search of a quick meal, but nothing is coming easily today. She stands on top of a hill to take a look around. Below her is an adult Argentinosaurus, much too big for Gualicho to even attempt to attack. The titanosaur’s tail alone could break all of Gualicho’s bones, if given the chance.

Next to the adult titanosaur is a juvenile Argentinosaurus. It’s the right size but too close to the adult to be worth it. If Gualicho had help, it might be possible to drive the two apart and chase after the smaller sauropod, but that’s not an option today.

At 25 ft (7.6 m) long, and weighing about 1 ton, Gualicho is a sizable carnivore, and Argentinosaurus isn’t the only game around. Gualicho walks down the hill, away from the titanosaur pair, and continues her search for food.

Fortunately, she doesn’t have to go far. She comes across a small group of ornithopods, who are busy chewing on some leaves. They all pause and grow stiff when Gualicho approaches them.

Gualicho hesitates a moment to assess. She has the advantage. Though she has weak forelimbs with only two digits—a thumb and forefinger—she doesn’t need to rely on them. She has a strong bite force. But she does need to be able to catch one of the ornithopods.

Gualicho locks her eyes on the injured one and runs at it, her mouth wide open, jaws ready to clamp on to her prey.

It doesn’t take her long to catch up to the dinosaur. Its eyes widen as it realizes this is the end. Gualicho takes a bite out of its back as it runs from her, causing it to stumble and fall. She jumps on top of the body and rips open its neck with her teeth. The ornithopod becomes still and limp.

Satisfied, Gualicho begins to feast. But, after only two bites, she senses something is wrong. She lifts her head and sees a Mapusaurus making its way toward her.

Mapusaurus is larger than her, about 33 ft (10 m) long and weighing three times as much. Gualicho knows she needs to give up her meal. She takes one last large bite, and then backs away slowly, to show submission.

The Mapusaurus gains ground and barks at Gualicho. Taking the hint, she sprints back up the hill, far enough to not be a threat but close enough to keep an eye on Mapusaurus. It probably won’t eat everything, and Gualicho may still be able to pick off chunks.

Pieces of meat are stuck between Gualicho’s teeth, and some blood covers her face. She gives out a low growl, unhappy to have to leave behind her kill.

Find out more in the I Know Dino podcast, episode 87, “Iguanodon.” Sabrina is a writer and podcaster. She loves nerdy things, like technical specs and dinosaurs, especially sauropods. When she’s not writing, she’s podcasting with her husband at I Know Dino (iknowdino.com), a weekly show about dinosaurs.