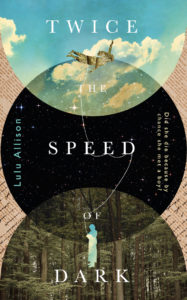 I’m delighted to welcome you to my stop on the blog tour for Twice the Speed of Dark by Lulu Allison. Thank you to Lulu for sending me a review copy and for asking me to be on the tour. This is one I’m hoping to get to read very soon. It sounds fabulous and Lulu crowdfunded for the publication through Unbound which I talked about here.

In the meantime I have an extract to share with you but first, let’s see what the book is about:

A mother and daughter circle each other, bound by love, separated by fatal violence.

Dismayed by the indifference she sees in the news to people who die in distant war and terror, Anna writes portraits of the victims, trying to understand the real impact of their deaths.

Meanwhile Anna’s daughter, killed by a violent boyfriend, tells her own story from the perplexing realms of death, reclaiming herself from the brutality.

Anna’s life is stifled by heartache; it is only through these acts of love for strangers that she allows herself an emotional connection to the world.

Can Anna free herself from the bondage of grief and find a connection to her daughter once more?

If it sounds like a book you would enjoy then you can you can buy it now in ebook and paperback.

This is an excerpt from chapter three. Anna is walking in the woods, inventing portraits of the people hidden behind the lifeless telling of casualties in the news.

The day is crisp and cold. The air is brittle, frozen thin, the tree trunks like metal. Victorian cast-iron pillars holding up a shelterless trellised roof. Christmas is nearly here again. Oh God, she wishes there were a hotel underground somewhere. No phone signal, no eyes to meet, no friendly enquiries about well-being and plans for the day. Just reclusive efficiency and a decent restaurant. Just a place to hide. Last year, the card from Michael’s grandchildren (step-grandchildren, though he does not recognise the offset), she struggled not to burn it. What was he thinking? She doesn’t think she has even met them.

She pulls away, sets her jaw again. Clenches her teeth and walks faster. There is a tart silence in the woods in this cold, broken only by small snaps of twig and freeze-dried leaves underfoot. Nothing, as she stops walking to examine her ankle, turned on a stone. There is pain but no damage. She walks on; leaves break again, small snaps under each step. She fills her thoughts with the people she will write in the new book later in the day. Twenty-nine killed by a suicide bomber. It is too many for her, too gruelling. She knows the limitations of her own accounting. But she sees some of them.

A girl, slender as willow, about twelve years old, hair that clouds around a face not yet firmed for adulthood. Now she is dressed for school, hair braided and tucked away, neat schoolwork tucked in her bag. She is a diligent worker, when unscripted dreams don’t pull her away out of the classroom window to fly, storyless, with the birds.

An old man, bent and fragile, curved like the corner of old paper. He walks each day, a slow shuffle through his now-tiny world. One of his grandchildren, a boy of eleven, walking in patient companionship with the beloved old man. He had been showing him a new knife, that most prized of possessions for a young boy. His knife will be picked up and vehemently cherished by one of the men who tries and forever fails to make sense of what was left in this broken arena.

A happy man, energetic and sprightly. He chats cheerily with the various food sellers, many he knows by name. He is on his way to a bookshop to collect an order, and plans to get flowers for his wife on the way home, to celebrate the birth of another grandchild. He tells the vendors of his good fortune. A girl with her dark hair neatly held under a pearl-grey headscarf. Her young and secret heart, her loves and friendships, her talent for maths. The girl stands in the cold, silent and afraid, framed by gateposts of beech. Anna tells her not to worry, she will be all right. She wishes she knew it to be true. A man whose life spins out before him, a mosaic of impenetrable design. A colourful, senseless, perhaps beautiful pattern. Fragments and tiles arranged, it seems to him, by another, mightier hand. He too is dead, his patterns dark forever.

A young woman, nineteen. There she is; she tries to sneak in, disguised a little here and there. But she is too familiar, too close. Her long limbs, her eyes the indeterminate colour of a river. She bubbles up through the dead before Anna’s eyes.

Anna stops, too close to summoning from memory rather than imagination. The shock of seeing Ryan has taken a sledgehammer to her defences. Damage has been done, walls are breached, doors cracked. Caitlin flits through the smallest chink, a wraith, a twist of pain.

Anna leans on a broad trunk, glad of its steadying girth. She focuses on the tree beneath her suddenly feeble hand. The tree has decades of practice in not losing its place, its place right there, that piece of earth and that piece of sky, roots and canopy held together by the steady trunk. She leans in, borrowing its expertise in being still, solid, placed, marshalling her evasions. She swallows, waiting until her mind is clear of trespassing memory, concentrating on the solid print of bark under her hand, pressing hard for more steadying contact. After a small while she peels her gloved palm from the kind tree and once more resumes her communion with the dead of her own reckoning.

There are lots of other blogs taking part in the tour so please have a look. Lulu Allison studied at Central St Martin’s School of Art. She then travelled and lived abroad for a number of years, playing in bands in New Zealand, teaching scuba diving in Fiji, making spectacle hinges in a factory in Germany before settling in Brighton. She exhibited her art and worked as a community artist for Towner Gallery and Fabrica Gallery whilst raising two children.

In 2013 what began as an art project took her into writing and she unexpectedly discovered what she should have been doing all along. The art project became Twice the speed of Dark, which on completion, was taken up by Unbound and published in the autumn of 2017.

Twice the Speed of Dark is her first novel. She is currently writing a second called Wetlands.