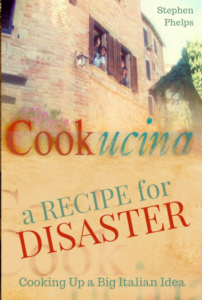 Posted on 3rd November 2017 By Nicola

I’m delighted today to be on the blog tour for Recipe for Disaster by Stephen Phelps. Thank you to Rachel Gilbey from Rachel’s Random Resources for the place on the tour. This book sounds fabulous and right up my street. Here’s what it’s about:

A Recipe for Disaster is a cookbook, a travelogue and the companion to Cookucina, a six-part TV series available on Amazon Video, iTunes and Google Play – see www.cookucina.com.

It’s also the entertaining journey of an Englishman struggling with the ups and downs of living in rural Italy. After giving up a successful career in television, Stephen found himself dragged back into a world he had happily given up when his neighbour, Lia, persuaded him to listen to her Big Idea – making a TV cookery series. But Lia speaks no English.

And Stephen’s partner, Tam, can’t cook. So, much against Stephen’s better judgement, the three of them embarked on a six-part series set among the rolling hills of the little-known, but spectacularly beautiful, Italian region of Le Marche. In the Cookucina TV series Lia teaches Tam to cook alla Marchigiana, while Tam translates. A Recipe for Disaster follows their many encounters with the real Italy – a world away from the picture-book ideal of summer holidays in Tuscany.

As the team try to construct a professional series with no funding they come to rely on the generosity of the Marchigiana people, while attempting to overcome the constant difficulties thrown up by those whose stubborn adherence to their age-old way of life is rooted in their beloved fields and woods. A Recipe for Disaster is a goldmine of simple yet delicious recipes, while peeling back the veneer of television professionalism and opening the door to a world of Italian surprise and delight.

A Recipe for Disaster comes with unique access to Cookucina, the final six-part TV series, so you can see for yourself how the team cracked their problems and (just about) held it all together in a blistering heatwave. Experience this contradictory world of vendettas and kind hearts through the laughter and frustrations of Stephen and the team, as you follow A Recipe for Disaster slowly coming to its surprising fruition.

And now for something a little bit different. I have a recipe for soft chocolate cake and ice cream. Here it is (no drooling please).

Melt the chocolate in a bain marie or in the microwave. Separate the egg yolks from the whites. Put the whites into a blender, add a pinch of salt and 5 tablespoons of sugar then whisk them until stiff. Beat the egg yolks with 3 tablespoons of sugar, then add the brandy. Mix the melted chocolate into the egg yolk mixture, then add the egg whites and gently fold them in lifting the chocolate mixture from the bottom upwards. Pour the final mixture into a 24 cm. diameter pan lined with parchment paper. Bake at 160 degrees for 20 mins.

Thank you, Stephen. It looks delicious and sounds really easy to make.

If you like the sound of Recipe for Disaster then here are all the purchase links you need: Educated at Oxford University, I began working with BBC Radio, moving to BBC TV where I launched Watchdog and produced the investigative legal series Rough Justice. In Hong Kong for BBC World Service Television I oversaw the start of BBC World. I then spent twelve years running my own TV production company, Just Television, specialising in investigative programmes in the field of law, justice and policing. In particular, Trial and Error for Channel 4 which exposed and investigated major miscarriages of justice, winning the Royal Television Society’s inaugural Specialist Journalism Award in 1999. Recently I have been working as a consultant for Aljazeera English on major documentary projects.

In 2002 I took an MA in Creative Writing at the University of East Anglia. Writing credits include many plays for BBC Radio, my most recent being a drama documentary for the 30th anniversary of the Herald of Free Enterprise disaster. Books: The Tizard Mission published by Westholme Publishing in the United States, tells the extraordinary story of how Britain’s top scientists travelled in secret to America in the autumn of 1940 to give away all their wartime secrets to secure US support in WWII. A Recipe for Disaster is a book about living in Italy while trying to make a TV cookery series, Cookucina (now available on Amazon Video, Google Play and iTunes.

I have several other books and three screenplays in development.