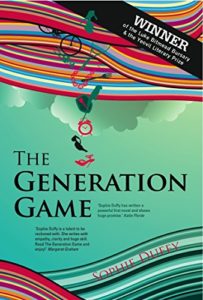 I was contacted by Imogen Harris from Legend Press about this book as there’s going to be a new edition published on 5th April this year and so it seemed to be a good time to share my pre-blog review of it from back in September 2011.

Philippa Smith is in her forties and has a beautiful newborn baby girl. She also has no husband, and nowhere to turn. So she turns to the only place she knows: the beginning.

Retracing her life, she confronts the daily obstacles that shaped her very existence. From the tragic events of her childhood abandonment, to the astonishing accomplishments of those close to her, Philippa learns of the sacrifices others chose to make, and the outcome of buried secrets.

Philippa discovers a celebration of life, love, and the Golden era of television. A reflection of everyday people, in not so everyday situations.

This is a very accomplished first novel from Sophie Duffy. It is narrated by Philippa Smith, 40 years old and just given birth, and she tells the story of her life from the very beginning.

What I particularly liked about the book were the social references. Some of the major events of the past 40 years are in there, together with references to styles, music and TV programmes from the different eras (such as The Generation Game!).

Philippa is a likeable character. She’s down to earth and aware of her own failings. From a difficult start in life, and quite a roller-coaster existence, the book leaves her in a good place, and I felt the end brought her full circle. I also loved some of the other characters, such as Wink and Mr Bob Sugar.

This is very much a slice of life story. No plot as such, just the story of an interesting life with many twists and turns. Something that could have possibly not have been all that stimulating a read has been made into a great read because of the quality of the writing, and the well-rounded characterisations.

I really enjoyed this book and look forward to seeing what Sophie Duffy comes up with next. Sophie Duffy is the author of The Generation Game (2011), The Holey Life(2012), Bright Stars (2015) and Betsy And Lillibet (2018). Her work has won the Yeovil Literary Prize and the Luke Bitmead Bursary, and has been nominated for the Guardian Not the Booker and the Harry Bowling Prize.

She is a writer and creative writing tutor and mentor for CreativeWritingMatters, as well as an administrator for the Exeter Novel Prize and other literary competitions.