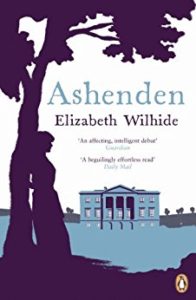 Today I’ve decided to share my review from July 2012 of a book which I absolutely adored – Ashenden by Elizabeth Wilhide.

Spring 2010, and when Charlie and Ros inherit Ashenden from their aunt Reggie a decision must be made. The beautiful eighteenth-century house, set in acres of English countryside, is in need of serious repair. Do they try to keep it in the family, or will they have to sell?

Moving back in time, in an interwoven narrative spanning two and a half centuries, we witness the house from its beginnings through to the present day. Along the way we meet those who have built the house, lived in it and loved it; those who have worked in it, and those who would subvert it to their own ends, including Mrs Trimble, housekeeper to the rackety, spendthrift Mores; the wealthy Henderson family, in their Victorian heyday; six-year-old Pudge; Walter Beckmann, prisoner in its grounds; and Reggie and Hugo, agents of its postwar revival.

Through good times and bad, the better we get to know the house, the more we care about its survival. A novel about people, architecture and living history, Ashenden is an evocative and allusive reflection on England and its past.

I knew when I read the blurb of this novel that it would be right up my street and I was right. In essence it is the story of a house, Ashenden Park, from the time it was first conceived to the present day. Each chapter features different characters through the last two and a half centuries from James Woods, who masterminded it all in the 1700s on behalf of his client, up to Charlie and Ros who have just inherited the house from their aunt Reggie in 2010.

The characterisations are wonderful and this is such a well-executed book. It did start a little slow and I felt slightly concerned that I wouldn’t be able to engage with each new set of characters, but it soon got into its stride and I became sad to leave the last chapter behind, but eager to start the next one, and indeed that is how I felt about the whole book in that I looked forward to reading it but didn’t want to finish it.

I particularly liked how some of the characters were carried through into the next one or even into a much later chapter, and yet others were just basically self-contained stories.

This is a really lovely book. If you like slice of life stories then this is the ultimate one with just a small slice of many characters’ lives. And if you like to read about the history of country houses then again this is ideal. I almost want to go back to the beginning and start again, knowing more about the, albeit fictional, history of the house and its occupants. Great read!

Ashenden is published by Penguin in ebook and paperback.

Elizabeth Wilhide is the author of over 20 books on interior design, decoration and architecture and a co-author and contributing editor to some 30 other titles, collaborating with authors such as David Linley, Terence Conran and Tricia Guild. Born in the United States, she has lived in Britain since 1967. She lives with her husband, an architect, and their two children in the East End of London.