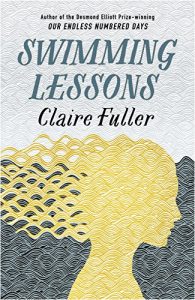 Posted on 2nd February 2017 By Nicola

This book has taken me longer than normal to review and I’ve written more than I usually do. I really struggled to get down in words what I wanted to say.

‘Gil Coleman looked down from the window and saw his dead wife standing on the pavement below.’

A possible sighting brings their children, Nan and Flora, home. Together they begin to confront the mystery of their mother. Is Ingrid dead? Or did she leave? And do the letters hidden within Gil’s books hold the answer to the truth behind his marriage, a truth hidden from everyone including his own children?

Swimming Lessons is an unusual and interesting story. Gil Coleman is a former university lecturer and a published author, much older than his wife, Ingrid, who disappears one day, leaving behind Gil and her two daughters.  The story is told alternately in the present day, as Flora and Nan return to the Swimming Pavilion where they grew up, brought there by Gil’s possible sighting of Ingrid, and also by Ingrid herself in a series of letters to Gil, hidden in his many books, as she tells the story of their life together. I thought this was a really clever and quirky way of revealing a story to the reader without doing so to the other characters, particularly as at the end of each letter Ingrid names the book that she has placed the letter in and the book is always relevant to the contents of the letter.

The main characters in Swimming Lessons are all deeply flawed and I can’t say I particularly liked any of them. Richard, Flora’s (maybe) boyfriend and Nan, her sister, are probably the easiest to like. I did feel a lot of sympathy for Ingrid too and I cared about all the characters despite the fact they weren’t always that likeable.

Claire Fuller is a very elegant writer. Her style is understated, lyrical and very descriptive. Every little detail is important and plays a part and her leading players are well-rounded. For instance, Flora clearly has a problem with what I call food contamination, i.e. she doesn’t like certain foods touching each other, and this helped to flesh out her character for me.  I felt like I could imagine every one of the characters, both in looks and in personality.

I found this book to be really rather sad. It’s about infidelity, love, loss and hope and there’s almost an inner ache to the novel, if that makes any sense. There’s a real poignancy to it.  There were a number of questions for me throughout that ended up going unanswered but that didn’t matter. The whole novel is an exercise in imagination and I was prepared to use my imagination to try and decide what had actually happened to Ingrid and what would happen to the other characters in the future.

A slow burner of a book but one which sets the imagination alight, this is not really a book about Ingrid’s disappearance but more about a dysfunctional family, a number of jigsaw pieces that never quite fitted together properly.  Claire Fuller is an insightful writer, capturing emotions so well. I haven’t yet read her first novel, Their Endless Numbered Days, but I really must do so.

Thank you to the publishers and Netgalley for the review copy.  Swimming Lessons was published on 26th January by Fig Tree (Penguin).

The super talented Claire Fuller is also an artist and she has drawn an image of Flora’s return home. I’m not going to give it away but they’re not raindrops in the picture!