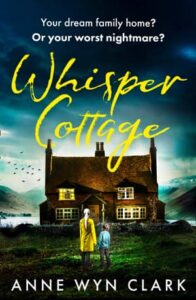 Whisper Cottage by Anne Wyn Clark is published by Avon and is out now in paperback, eBook and audiobook. My thanks to the author for sending me a copy for review.

A mysterious figure. A whispering community. A deadly secret…

When Stina and Jack move to an old rural cottage, they’re hoping for a fresh start. Their new home is run-down compared to their neighbour’s, but generous Mrs Barley quickly becomes a friend.

Until Stina sees a mysterious figure in the widow’s garden, and her happy new life begins to unravel. And when she hears strange noises in the night, she is forced to question if Mrs Barley is what she seems.

Why do the other villagers whisper about her? Why is she so eager to help the couple? And what is she hiding in her picture-perfect home?

A haunting, twisty story about the power of secrets and rumours, perfect for fans of Ruth Ware’s The Turn of the Key and Lucy Atkins’s Magpie Lane. A new start in the country for Stina and Jack takes them to Avoncote and Wisteria Cottage. Their only neighbour is Mrs Barley at Rose Cottage and naturally they become friends. As time goes on, however, Stina, being at home all day, starts to hear things and see things that make her wonder if Mrs Barley is all she seems to be and the rumours in the local village about her don’t help.

Stina is an unreliable narrator. It’s clear her past has been a bit troubled and I was constantly wondering if she could be trusted. The same goes for Mrs Barley who seemed very nice but was there something malevolent lurking under the surface? Anne Wyn Clark does a great job at keeping the reader guessing and all the way through I had no idea how it was all going to turn out in the end.

The setting is strong and although the book is largely character-driven, I felt like the setting was almost another character in its own right. The two cottages are quite remote and I could absolutely picture them in my mind’s eye. The whole small village feel and mentality is captured really well.

The pacing is very good too and I found myself looking forward to picking it up and reading a bit more. I found the story to be engaging and well thought out with a couple of nice surprises near the end. In short, I thought Whisper Cottage was an excellent psychological thriller debut, eerie and twisty. I shall look forward to Anne Wyn Clark’s next book.

Anne Wyn Clark lives in the Midlands with her husband and son, plus a rather temperamental cat, a rabbit and a chinchilla. She has three (now grown-up) children and five grandchildren. She is particularly partial to Italian food, decent red wine (or any coloured wine come to that…) and cake – and has been known to over-indulge in each on occasions. She has a penchant for visiting old graveyards and speculating on the demise of those entombed beneath.