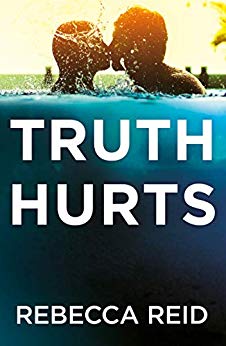 Posted on 7th September 2019 By Nicola

Oh how I loved this book. I’m delighted to be reviewing it today as part of the blog tour. My thanks to Anne Cater from Random Things Tours for the place on the tour and to Becky Short from Transworld for sending me a proof copy of the book for review purposes.

Poppy has a secret.

It was a whirlwind romance. And when Drew, caught up in the moment, suggests that he and Poppy don’t tell each other anything about their past lives, that they live only for the here and now, for the future they are building together, Poppy jumps at the chance for a fresh start.

Drew says he has nothing to hide.

But it doesn’t take long for Poppy to see that this is a two-way deal. Drew is hiding something from her. And Poppy suddenly has no idea who the man she has married really is, what he is hiding from her or what he might be capable of.

Which is more dangerous, a secret or a lie?

I loved Rebecca Reid’s first novel, Perfect Liars, but I really really loved Truth Hurts. I thought it was A-mazing!!!

Poppy is a nanny when, whilst in Ibiza with the family she works for, she is sacked. Finding herself with nowhere to go she ends up at a bar and there she meets Drew, a charismatic older man. After a whirlwind romance they marry. Drew suggests a pact: that they don’t ask each other anything about the other’s past. Poppy likes this idea as there is clearly something that she doesn’t want him to know about, and so she jumps at the chance to keep her past a secret. But slowly there comes an unease within Poppy. What is Drew not telling her?

This is an absolutely perfectly crafted novel. I just couldn’t put it down. It’s 350 or so pages of pure intrigue. Yet the truth of it is that it doesn’t have a plot full of twists and turns. Instead it’s one where I knew that something was amiss and I was just waiting for it to be revealed. In the meantime, I was treated to the story of Drew and Poppy’s life together, their new home, Poppy’s discomfort with the building and his friends.

As I hurtled towards the end of the story I just couldn’t think what was going to happen, how it was going to be wound up in so few pages but wow, what an ending! Totally unexpected, completely out of the blue and very cunning.

Truth Hurts is full of tension and I found Drew and Poppy to be two such fascinating characters. It is a psychological thriller but it doesn’t have to rely on bizarre events to make it interesting. We simply follow two newly intertwined lives and eventually take a look under the surface to see what lurks there.

Rebecca Reid’s writing is pure quality. She writes some of the worst human characteristics incredibly well. I’d pick up her next book without even reading the blurb. Rebecca is a freelance journalist. She is a columnist for the Telegraph Women’s section, works for Metro Online and has written for Marie Claire, the Guardian, the Saturday Telegraph, the Independent, Stylist, Glamour, the iPaper, the Guardian, Indy100, LOOK and the New Statesmen amongst others. Rebecca is a regular contributor to Sky News and ITV’s This Morning as well as appearing on Radio 4’s Woman’s Hour, LBC, BBC News 24 and the BBC World Service to discuss her work.

She graduated from Royal Holloway’s Creative Writing MA in 2015 and Perfect Liars is her debut novel.