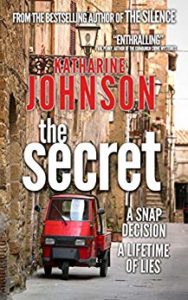 I’m very happy to be taking part in the blog tour for The Secret by Katharine Johnson today. My thanks to Rachel Gilbey from Rachel’s Random Resources for the place on the tour and for providing a copy of the book for review.

Two girls growing up in Mussolini’s Italy share a secret that has devastating consequences.

Against a backdrop of fear, poverty and confusion during the Second World War, friendship is tested, and loyalties are divided until a chance encounter changes everything.

Carlo and Cass have just returned to the small Tuscan village of Carlo’s youth. He left to make his way in America many years ago but it’s time to come home. His mother, Irena, is still there but is losing her memory and Carlo wants to rescue those memories while he still can and so gives Irena a voice recorder. It enables Irena to somehow become free enough to tell the story of her youth with her best friend, Martina, a story that has been kept quiet for a long time. But that story is more tangled than Carlo could have guessed as we journey back with Irena to the early 1940s, to Mussolini’s Italy and to the secret of the title.

The Secret is the follow up to The Silence. I haven’t read The Silence and whilst The Secret works perfectly well as a standalone story, I did feel like I had missed a little bit of something from that first story. It didn’t matter too much though as there was more than enough going on in The Secret to keep me occupied.

I tore through this book. Italy then was a difficult place to live and the village suffers terribly. I really wanted to know what the secret was and I was shocked by it, although I was even more shocked by something that wasn’t actually the secret. Katharine Johnson has written quite an enthralling story here and I was very impressed by the way she managed to convey the sights, smells and sounds of Italy so well.

One thing that I would say is that I thought the current day story with Carlo and Cass, and their restaurant, felt a bit like it was there to facilitate the wartime story, rather than being a story in its own right. Overall though, it’s an excellent story of friendship and betrayal during a time of conflict. Win 1 x Signed copy of The Secret and 1 x Signed Copy of The Silence (UK Only)
*Terms and Conditions –UK entries welcome. Please enter using the Rafflecopter box below. The winner will be selected at random via Rafflecopter from all valid entries and will be notified by Twitter and/or email. If no response is received within 7 days then the giveaway organiser reserves the right to select an alternative winner. Open to all entrants aged 18 or over. Any personal data given as part of the competition entry is used for this purpose only and will not be shared with third parties, with the exception of the winners’ information. This will be collected by the giveaway organiser and used only for fulfilment of the prize, after which time the data will be deleted. I am not responsible for dispatch or delivery of the prize.
a Rafflecopter giveaway Katharine Johnson likes writing about ordinary people who through a character flaw or bad decision find themselves in extraordinary situations. She’s a journalist living in Berkshire, England with her family and springy spaniel. When she’s not writing you’ll find her exploring cities, visiting old houses, playing netball, eating cake or restoring her house in Italy which is nothing like Villa Leonida.