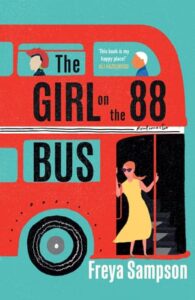 ShortBookandScribes #BookReview – The Girl on the 88 Bus by Freya Sampson

The Girl on the 88 Bus by Freya Sampson will be published on 9th June in hardcover, eBook and audiobook by Zaffre. My thanks to the publishers for the proof copy of the book.

When Libby Nicholls arrives in London, broken-hearted and with her life in tatters, the first person she meets on the bus is elderly pensioner Frank. He tells her about the time in 1962 he met a girl on the number 88 bus with beautiful red hair just like her own. They made plans for a date, but Frank lost the ticket with her number written on it. For the past sixty years, he’s ridden the same bus trying to find her.

Libby is inspired by the story and, with the help of an unlikely companion, she makes it her mission to continue Frank’s search. As she begins to open her guarded heart to strangers and new connections, Libby’s tightly controlled world expands. But with Frank’s dementia progressing quickly, their chance of finding the girl on the 88 bus is slipping away . . .

More than anything, Libby wants Frank to see his lost love one more time. But their quest also shows Libby just how important it is to embrace her own chance for happiness – before it’s too late. Back in 1962 Frank met a girl on the 88 bus. They hit it off and he asked for her number….and then lost it! He’s spent the last 60 years travelling on the 88 hoping to see her again. In 2022 Libby unexpectedly finds herself in London travelling on the 88 bus when she meets Frank and they get chatting about his girl. They become friends and she pledges to help him find the ‘girl’ before time runs out.

This is an absolutely charming book in every way. It has a lightness to it that makes it so easy to read but it does cover some more emotional issues too, managing to be both moving and witty in equal measures. The characters are just wonderful. I loved Frank who, now well into his 80s, is suffering the ravages that age often brings. Libby, too, is such a perfect creation, and helping Frank brings changes to her life that she never expected, including new friends, Dylan and Esme.

I particularly liked the parallels between the girl and Libby. Freya Sampson did a wonderful job with this gorgeous story, taking events full circle with subtlety and care. This book is full of warmth and is so touching and uplifting, a tale of chance encounters and their life-changing effects.

With The Girl on the 88 Bus, Sampson has cemented her place in my ‘authors whose books I would read without knowing anything about them’ list. Just as with The Last Library, this is a book where I wanted to jump between the covers and be friends with Frank, Libby and Dylan. It’s a story of what might have been, but also celebrates what there already is.

I strongly recommend you stick your hand out and get on the 88 bus with Frank and Libby. You won’t regret it.

Freya Sampson worked in TV and was the executive producer of Channel 4’s Four in a Bed and Gogglesprogs.

She studied History at Cambridge University and is a graduate of the Faber Academy. She lives in London with her husband, two young children and an antisocial cat.

Her debut novel, The Last Library, was published in 2021, The Girl on the 88 Bus is her second novel.