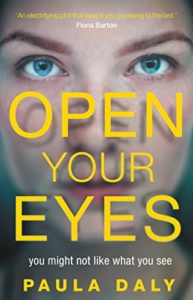 My review today is of Open Your Eyes by Paula Daly. It’s another book that I read in daily staves via The Pigeonhole so I’d like to thank them and the publishers for the opportunity to read such a fabulous and clever book.

Haven’t we all wanted to pretend everything is fine?

Jane doesn’t like confrontation. Given the choice, she’d prefer to focus on what’s going well, the good things in life.

But when her husband, Leon, is brutally attacked in the driveway of their home, in front of their two young children, Jane has to face reality. As he lies in a coma, Jane must open her eyes to the problems in her life, and the secrets that have been kept from her, if she’s to find out who hurt her husband – and why.

Open Your Eyes is such a good read. It’s about lives being turned upside down and how secrets can come to light because of it.

Leon is a crime fiction writer, a successful one. Jane is also a writer, but has not yet enjoyed any success. The book starts with them having a normal day. It’s Leon’s birthday and the family, Leon, Jane and their two young children, are off to his mother’s for tea. There’s the usual light bickering that happens when families are cooped up in the car together. But they don’t even get off the drive before something terrible happens to Leon.

You might think that after such a major event in the first few pages the story might dip a bit but it doesn’t at all. Jane starts to make all sorts of discoveries whilst Leon is indisposed and it rocks her world.

I got thoroughly involved in this story. I was pulled into Jane’s predicament, I witnessed her confusion, her children’s bewilderment. I, just like Jane, couldn’t work out why Leon had been attacked (I have to say it is one of the most original methods of causing harm I have come across!). I was kept guessing until right at the end of the book when all was revealed.

As Jane sets about discovering more about why Leon may have been targeted, there’s a greater sense of foreboding looming over it all. Did Jane really know her husband at all? The pace is just right – it’s not a hugely fast paced thriller, more an unfolding of events over a period of time. Nevertheless, it’s utterly thrilling from start to finish.

I loved the fact that the main characters are writers. It brought an extra level of interest to the story for me. And the supporting characters are all great too, from the policewoman to Jane’s neighbours. They all play their own important part in the story.

Open Your Eyes was an absolute page turner. I liked Jane immensely and hoped so much for some resolution for her. Whether she gets it or not I won’t give away, but the conclusion was absolutely perfect, as was the whole novel. It’s a tour de force in the domestic noir genre and I thought it was an excellent read. Paula Daly is the critically acclaimed author of four novels. Her work has been sold in fifteen countries, shortlisted for the CWA Gold Dagger Crime Novel of the Year, and her books are currently being developed for television. She was born in Lancashire and lives in the Lake District with her husband, three children and whippet Skippy.