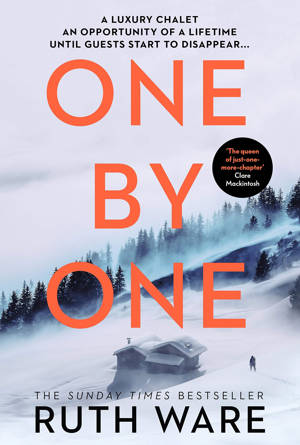 ShortBookandScribes #BookReview – One By One by Ruth Ware

It’s publication day for One By One by Ruth Ware. Congratulations to the author and publisher! This is a fantastic read and I’m delighted to be sharing my review with you today. My thanks to Graeme Williams for asking me to be part of the team helping to promote the book and to Harvill Secker for sending a copy of the book for review purposes. **The unmissable new thriller from the queen of the modern-day murder mystery.**

Snow is falling in the exclusive alpine ski resort of Saint Antoine, as the shareholders and directors of Snoop, the hottest new music app, gather for a make or break corporate retreat to decide the future of the company. At stake is a billion-dollar dot com buyout that could make them all millionaires, or leave some of them out in the cold.

The clock is ticking on the offer, and with the group irrevocably split, tensions are running high. When an avalanche cuts the chalet off from help, and one board member goes missing in the snow, the group is forced to ask – would someone resort to murder, to get what they want? Oh wow, what a ride I have been on with One By One. It’s an absolutely brilliant read.

The book begins with a list of the personnel at Snoop, an innovative music app. It’s quite obvious they’re all a bit pretentious but also very successful. The team gather at an alpine ski resort to engage in what is basically a corporate get together from hell, to discuss whether they should let Snoop be bought out or not. Some people stand to gain more than others if it is. The one person who doesn’t quite fit in is Liz. She doesn’t work for Snoop anymore so why has she come along?

The story is told from two viewpoints. One is Liz and the other is Erin who, along with Danny the chef, runs the chalet in which the Snoop team are staying. This is such an effective way of telling the story giving both an insider and outsider perspective in terms of the hierarchy of the group, and from someone who is unfamiliar with their surroundings and someone who knows them well.

The setting is amazing. It actually gave me the heebies. The thought of being stuck in that chalet with people who could stab you in the back at any moment (maybe literally!) made me feel claustrophobic and that was even before the avalanche that cut them off from civilisation. It really felt like the elements were conspiring against them and the author did a magnificent job at setting the scene and portraying the unpredictability of the weather.

What Ware also does impeccably is ramp up the tension. Combined with the volatility of the snow, we have somebody who is picking off guests one by one and I was on the edge of my seat. It’s not necessarily that there were huge surprises in this story; it’s not about unexpected twists, it’s about the way we’re kept wondering and the expert plotting that really brings this story right off the page.

I really didn’t want to put One By One down. It’s so fast-paced and flicking between Liz and Erin, sometimes in short chapters, just enhanced the tension for me. This is a book that’s full of atmosphere, it’s exciting, it’s chilling, a cat and mouse game at its best, and a fantastic locked room style mystery. Bravo!

Ruth Ware is an international number one bestseller. Her thrillers In a Dark, Dark Wood, The Woman in Cabin 10, The Lying Game, The Death of Mrs Westaway, The Turn of the Key and One by One have appeared on bestseller lists around the world, including the Sunday Times and New York Times, and she is published in more than 40 languages. Ruth lives near Brighton with her family.