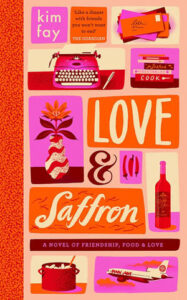 Today I’m sharing my thoughts about this short and satisfying book. Love & Saffron by Kim Fay is out now in hardcover, eBook and audiobook. My thanks to Two Roads Books for the proof copy of the book.

When twenty-seven-year-old Joan Bergstrom sends a fan letter – as well as a gift of saffron – to fifty-nine-year-old Imogen Fortier, a life-changing friendship begins. Joan lives in Los Angeles and is just starting out as a writer for the newspaper food pages. Imogen lives on Camano Island outside Seattle, writing a monthly column for a Pacific Northwest magazine, and while she can hunt elk and dig for clams, she’s never tasted fresh garlic – exotic fare in the Northwest US of the 1960s. As the two women commune through their letters, they build a closeness that sustains them through the unexpected changes in their own lives.

Food and a good life – they can’t be separated. It is a discovery the women share not only with each other, but with the men in their lives. Because of her correspondence with Joan, Imogen’s decades-long marriage blossoms into something new and exciting, and in turn, Joan learns that true love does not always come in the form we expect it to.

Into this beautiful, intimate world comes the ultimate test of Joan and Imogen’s friendship – a test that summons their unconditional trust in one another. Love & Saffron is an absolute delight from start to finish, a book crammed with charm and emotion. I must admit to a love/hate relationship with the epistolary novel. The letter format often takes away the depth of feeling that I really want from a book and so I approached Love & Saffron, a book that I thought sounded lovely, with a degree of caution. I needn’t have worried though. My feelings for the two main characters grew as their friendship did, from a rather formal beginning to a closeness that neither they, nor I, could have imagined.

The two characters are Joan, aged 27, and Imogen, aged 59. Their correspondence begins when Joan writes a fan letter to Imogen, who has a regular food column in a magazine. It’s early 1960s America and so there’s no immediacy to their communications which brings a gentleness to the whole story. As the book progresses the two women become very good friends, despite the long-distance and the age gap between them.

The early gift of saffron from Joan to Imogen unites them in a love of food and flavours. There are plenty of descriptions of herbs and food from various cultures in their letters and I really loved the tales of finding ingredients, shopping at markets, and cooking. There’s even a few recipes to enjoy.

Love & Saffron moved me greatly, particularly when one of the characters does something so incredibly thoughtful, and then at the end. Tears were shed and I found myself coming away with a feeling of warmth and a deep regard for Joan and Imogen, who had unexpectedly found the friendship of a lifetime. It’s a short book and covers a relatively short period of time, but it worked perfectly, never felt rushed, and just felt right. I thought it was completely gorgeous.

Kim Fay is the author of the historical novel, The Map of Lost Memories, an Edgar Award finalist for Best First Novel, and the food memoir Communion: A Culinary Journey Through Vietnam, a Gourmand World Cookbook Award winner. She created and served as the series editor for the “To Asia With Love” guidebooks, and was the Hotel Editor for the travel, food and lifestyle website, Gayot.com, for thirteen years. In addition, she reviews crime fiction in translation and works by Los Angeles authors for the Los Angeles Review of Books. She is currently the Managing Editor/Content Manager for The Animation Guild’s Keyframe magazine and website.