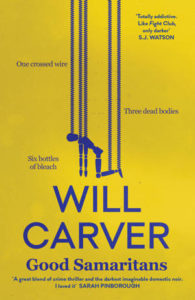 I’m delighted to be reviewing Good Samaritans by Will Carver today. My thanks to Orenda Books and Anne Cater from Random Things Tours for the place on the tour and for providing a review e-copy.

Seth Beauman can’t sleep. He stays up late, calling strangers from his phonebook, hoping to make a connection, while his wife, Maeve, sleeps upstairs. A crossed wire finds a suicidal Hadley Serf on the phone to Seth, thinking she is talking to The Samaritans.

And someone is watching…

Dark, sexy, dangerous and wildly readable, Good Samaritans marks the scorching return of one of crime fiction’s most exceptional voices.

I’d heard so much about Good Samaritans before I started reading it, all of it good. I was expecting unusual and a bit quirky and that’s exactly what I got.

There are five major characters in this book, anyone else is simply a bit part. Seth is a chronic insomniac, who whiles away the night ringing strangers, asking them if they want to talk. Inevitably most don’t, but occasionally he gets lucky. Maeve, his wife, puts up with his late night dalliances, but there’s so much more to Maeve than initially meets the eye.

Then there’s Hadley, a young and suicidal woman, who rings the Samaritans but somehow gets Seth. And Ant works for The Samaritans and inadvertently ends up speaking to Hadley. See how twisty this is already getting and this is the tip of the iceberg.

Character number five is a policeman investigating the three dead bodies. How they are all linked is clever and cunning, twisty yet never confusing.

There’s a lot of dry humour in Good Samaritans. Many times I found I was smiling to myself. Most of this humour came from Seth who is an incredibly well-drawn character. The descriptions of his insomnia and the way it made him feel and behave were so vivid.

The first half of the book concentrates on Seth, Hadley and Ant until wham bam, something sort of unexpected happens. I say sort of because I was expecting it but not exactly how it happened. Surprise number 1. In the second half, the action shifts around and the focus on the characters changes around. As I headed towards the end, again, part of what happens was exactly what I was expecting, but then that curveball was thrown at me again and I had surprise number 2. Will Carver certainly plotted this novel carefully to ensure shock value.

I found Good Samaritans to be a perfectly dark story, naughty, different, surprising and edgy. I can’t fail to mention the large amount of detailed sexual activity but it fits well with the characters and the story structure. All I can say is be very careful who you chat to on the phone and keep an eye on anybody buying bleach in the supermarket or petrol station. You never know what’s happening behind closed doors! Will Carver is the international bestselling author of the January David series (Arrow). He spent his early years in Germany, but returned to the UK at age 11, when his sporting career took off. He turned down a professional rugby contract to study theatre and
television at King Alfred’s, Winchester, where he set up a successful theatre company.

He currently runs his own fitness and nutrition company, while working on his next thriller. He lives in Reading with his two children.