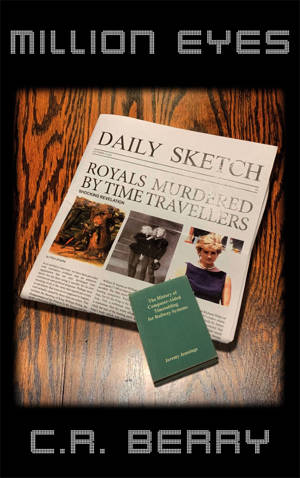 I’m delighted to be taking part in the blog tour today for Million Eyes by C.R. Berry, a book that’s right up my street. I also have an extract to share with you to give you a flavour of the story. My thanks to Elsewhen Press for sending me a copy of the book for review purposes and to Rachel Gilbey from Rachel’s Random Resources for the place on the tour.

How do you fight an enemy who has a million eyes?

What if we’re living in an alternate timeline? What if the car crash that killed Princess Diana, the disappearance of the Princes in the Tower, and the shooting of King William II weren’t supposed to happen?

Ex-history teacher Gregory Ferro finds evidence that a cabal of time travellers is responsible for several key events in our history. These events all seem to hinge on a dry textbook published in 1995, referenced in a history book written in 1977 and mentioned in a letter to Edward III in 1348.

Ferro teams up with down-on-her-luck graduate Jennifer Larson to get to the truth and discover the relevance of a book that seems to defy the arrow of time. But the time travellers are watching closely. Soon the duo are targeted by assassins willing to rewrite history to bury them.

Million Eyes is a fast-paced conspiracy thriller about power, corruption and destiny.

Yes, Million Eyes has all of the above which is what made me fairly sure I would enjoy it. In fact I loved it and found it hard to put down, reading it within the space of a day.

The concept of the story is that tragic royal events weren’t actually meant to happen and that they all came about because time travellers went back in time and made them happen, all in the pursuit of a rather oddly named textbook. What always completely flummoxes me about time travel is the question of whether people in the future are making the events happen to create an eventuality of their choosing or whether they were going to happen anyway and they’re not altering anything, just experiencing it, and oh my goodness……….there’s my mind flummoxed all over again.

I absolutely love this kind of story, one that challenges me to get my head around it, to put pieces together to make a whole. I thought Million Eyes was incredibly well-plotted, everything made perfect sense even whilst my mind was trying to get itself around all that was going on. As a royalist and someone who enjoys historical fiction, I found the idea absolutely fascinating that Princess Diana’s crash might have been orchestrated for some reason other than the many conspiracy theories we already know about, and I found completely thrilling the possibility that the Princes in the Tower in 1483 might have disappeared in different circumstances to what history tells us might have happened.

This is also a story of technology and its sometimes dubious powers. The notion of a million eyes watching us isn’t exactly new but it’s stories like this one that really make me think of the consequences of our modern environment.

This book was right up my street and I’m so pleased to know it’s the first in a trilogy. I enjoyed the characterisations, with Jennifer and Ferro investigating in the current day, the villains of the piece, and then the historical figures, and I thought the author’s writing was engaging, smart and skilful. If you love a mind-boggling tale combining fact and fiction that really makes you think then Million Eyes comes recommended by me. As his servant moored the boat, King William II of England cast his eyes one last time over the unworldly book. Then he closed and fastened the box it was in and slipped it back into his satchel. He climbed out of the boat, boots squelching as he stepped onto the muddy shore of the River Thames.

“Remain here,” William said to the servant. “I shan’t be long.”

The evening dusk thickening fast, William entered the great keep of the Tower of London and climbed the spiral staircase to the second floor, finding his chief minister, Ranulf Flambard, waiting inside the Chapel of St John. With its imposing tunnel-vaulted French stone nave and thick, round columns supporting unmoulded, unadorned arches, the chapel was a stark and uncompromising demonstration of Norman power. One that normally helped William feel in control. Not today.

“Good evening, Your Grace,” said Ranulf in his usual rumble of a voice, deepened even further by the cold, impenetrable stone that surrounded them.

“That remains to be seen, Ranulf,” said William, opening his satchel and lifting out the box.

“I take it you’ve made a decision about the book, then.”

For weeks the book had brought William nothing but confusion and turmoil. There was so much about it that didn’t make sense. Its constitution, for one. It was so cleanly cut and shaped, with thin cover boards dressed in a strange, dark green cloth so fine it was near-impossible to trace the thread, and William could not imagine fingers small enough to have woven it. Its only markings were The History of Computer-Aided Timetabling for Railway Systems and Jeremy Jennings gold-tooled onto the front and spine, and these were an even bigger mystery. Jeremy and Jennings looked like names, his experts said, and The History of Computer-Aided Timetabling for Railway Systems were utterly meaningless but for a few of the words vaguely resembling some Latin ones.

And if these frightening irregularities weren’t enough, what lay beneath the book’s covers was worse. Far worse. A part of William wished he’d never opened the damn thing and yet another, bigger, part of him knew that God had endowed him with this knowledge on the understanding that he, the king, would do something about it.

“We must protect it,” said William, brushing his fingers over the oak frame and riveted iron bands of the box. “This book is evidence of a serious threat to the kingdom and of those behind it. It is an omen. An omen foretelling a future that God is compelling me to avert.”

“Yes, sire. How would you seek to protect it?”

“By hiding it. The prisoner’s people must know we have it. They could be here in London right now, waiting for the right moment to come and retrieve it. It cannot remain here.”

“I am charging you with the task of hiding it, Ranulf. Find a low-born family of minimal conspicuousness and make sure they understand the importance of the book and its secrets and can be trusted to protect them.”

Though reluctant to part with it, William handed the box to his chief minister, reassuring himself of his decision. Then he reached beneath his cloak and tunic and unhooked a silver chain from around his neck, on which hung a small key. “Here. You’ll need this. It is the key to open the box.”

Ranulf placed the chain around his own neck, tucking the key into his bishop’s robe. “And what of the prisoner? Do you have a plan?”

Oh, how William wished he did. Unfortunately the outlander who was found with the book was but another lingering mystery in an ever-deepening quagmire of them. “Not yet. We must keep trying to ascertain the prisoner’s intentions and role in all this.”

Ranulf frowned. “But how? We have no way of communicating.”

William sighed. “It is a good question, my friend. But I fear, as of this moment, the answer evades me.”

“Then perhaps a quiet execution is the most sensible course.”

“It could well be. But I must not risk provoking an enemy I do not know how to fight.”

“I understand. Will you inform the Council about any of this?”

William shook his head. “Not until I determine who can be trusted. The lesser curia regis will meet in two days to discuss Aquitaine. I want the book gone and hidden before then.”

William’s long-planned invasion of Aquitaine was to be the pinnacle of his reign. He owed it to his father, who had afforded him a great honour by giving England to him instead of his elder brother, Robert. William had enjoyed some successes—securing his hold on England, recapturing Maine, subduing Robert—but none so big as his father’s victory at Hastings, earning him the name ‘Conqueror’. A fact he was reminded of all too often by the embroidery that hung above the Palace of Westminster’s main staircase. A variation of his father’s favourite scene from the enormous, ostentatious portrayal of the Norman conquest that adorned the nave of Bayeux Cathedral, it depicted his father astride his horse holding up the crown of England, with defeated Saxon king Harold II lying trampled beneath his horse’s hooves with an arrow through his eye.

Aquitaine was to be his Hastings. He would soon replace the embroidery at Westminster with a depiction of his own great victory. The book—and the prisoner—were distractions he couldn’t afford.

Ranulf shrouded the box in the folds of his robe, bowed and left the Tower. William wheezed a sigh. He wasn’t sure whether it was with relief, doubt, fear—or something else. C.R. Berry caught the writing bug at the tender age of four and has never recovered. His earliest stories were filled with witches, monsters, evil headteachers, Disney characters and the occasional Dalek. He realised pretty quickly that his favourite characters were usually the villains. He wonders if that’s what led him to become a criminal lawyer. It’s certainly why he’s taken to writing conspiracy thrillers, where the baddies are numerous and everywhere.

After a few years getting a more rounded view of human nature’s darker side, he quit lawyering and turned to writing full-time. He now works as a freelance copywriter and novelist and blogs about conspiracy theories, time travel and otherworldly weirdness.

He was shortlisted in the 2018 Grindstone Literary International Novel Competition and has been published in numerous magazines and anthologies, including Storgy, Dark Tales, Theme of Absence and Suspense Magazine. He was also shortlisted in the Aeon Award Contest, highly commended by Writers’ Forum, and won second prize in the inaugural To Hull and Back Humorous Short Story Competition.

He grew up in Farnborough, Hampshire, a town he says has as much character as a broccoli. He’s since moved to the “much more interesting and charming” Haslemere in Surrey.