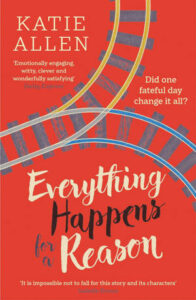 ShortBookandScribes #BookReview – Everything Happens for a Reason by Katie Allen #JubilantJune

It’s paperback publication day for Everything Happens for a Reason by Katie Allen and I’m sharing my thoughts about it today. My thanks to the lovely Orenda Books for sending me a proof copy for review purposes.

Mum-to-be Rachel did everything right, but it all went wrong. Her son, Luke, was stillborn and she finds herself on maternity leave without a baby, trying to make sense of her loss.

When a misguided well-wisher tells her that “everything happens for a reason”, she becomes obsessed with finding that reason, driven by grief and convinced that she is somehow to blame. She remembers that on the day she discovered her pregnancy, she’d stopped a man from jumping in front of a train, and she’s now certain that saving his life cost her the life of her son.

Desperate to find him, she enlists an unlikely ally in Lola, an Underground worker, and Lola’s seven-year-old daughter, Josephine, and eventually tracks him down, with completely unexpected results…

Both a heart-wrenchingly poignant portrait of grief and a gloriously uplifting and disarmingly funny story of a young woman’s determination, Everything Happens for a Reason is a bittersweet, life- affirming read and, quite simply, unforgettable. Everything happens for a reason. That’s what Rachel is told when her baby is stillborn. But does it really? If so, what possible reason can there be for this terrible loss. Rachel clings onto the fact that on the day she found out she was pregnant she saved a stranger from jumping in front of a train. Was he special? Did she give up her baby’s life to save his?

I can certainly imagine that it might be a comfort to have that reason but it takes Rachel down some rather odd paths. It’s grief, of course, but her behaviour seems to be increasingly bizarre, leading her to find the man she saved via new friends, Lola and her daughter, Josephine.

The format of this book is unusual, consisting as it does of Rachel’s emails to her baby, Luke, but it works to brilliant effect. It felt very conversational in style and although she was talking to her baby it felt like she was talking to me. I expected to be moved by this story, who could fail to be? What I didn’t expect was to guffaw so much. There’s some really dry humour in it which I think was needed to lift the story and give Rachel hope for the future. I was shocked at the insensitivity of some people towards her but I suppose it’s one of those situations where nobody can really say the right thing. Nevertheless, there were lots of sharp intakes of breath from me along the way.

This is a really great debut novel from Katie Allen. It feels different and innovative, with a raw honesty to the writing. I felt it was a candid look at the after-effects of grief and the ongoing sense of loss, with the world carrying on around you and expecting you to do the same, but also it’s ultimately uplifting and thought-provoking with some cute doggy-ness thrown in. I enjoyed it a lot.

Everything Happens for a Reason is Katie Allen’s first novel. She used to be a reporter and columnist at the Guardian and Observer, and started her career as a Reuters correspondent in Berlin and London.

The events in Everything Happens for a Reason are fiction, but the premise is loosely autobiographical. Katie’s son, Finn, was stillborn in 2010, and her grief and the experience of being on maternity leave without a baby inspired her main character. And yes, someone did say to her “Everything happens for a reason”.

It didn’t propel her to borrow a sausage dog, but it was probably the kernel of this novel. Katie grew up in Warwickshire and now lives in South London with her husband, children, dog, cat and stick insects.

When she’s not writing or walking children and dogs, she loves baking, watching comedies, reading news and wishing she had written other people’s brilliant novels. She also loves quiz shows and forcing friends to do quizzes and she wastes hours meandering on the web – but she put that to some use by appearing on the TV show Pointless with her brother Nick.