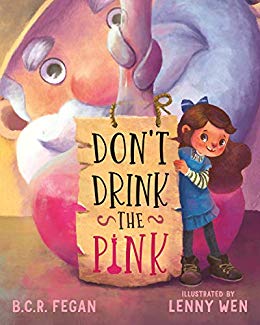 I’m having a children’s fiction day on my blog today so do check out my reviews of Greedy Gertie and The Book of Silly Rhymes too.

I’d like to thank Lovereading for providing me with an ecopy of Don’t Drink the Pink for review purposes.

Follow the special relationship between Madeline and her Grandfather as they both grow and share in the most magical birthday experiences. Filled with secrets to uncover and brimming with imagination, Don’t Drink the Pink explores a number of basic concepts including colors, numbers and the reality of growing older.

My five year old son and I absolutely loved Don’t Drink the Pink. In fact, he made me read it to him twice, one straight after the other, partly because he loved it and partly because he wanted to read it the second time after taking on board what happens in it.

The book begins on Madeline’s first birthday. Her beloved grandfather is always busy in his workshop cooking up, as it turns out, wonderful potions that give Madeline a superpower. Each year, on her birthday, she gets to choose a new potion but each time her grandfather tells her “just don’t drink the pink”. She gets to be tiny, to be a giant, to be able to move faster than a locomotive and, my personal favourite, to be able to build rollercoasters for herself and her friends.

So many things about this book make it special. Firstly, it all rhymes which I think gives it a rhythmical flow that really keeps children (and their grown ups) interested. Secondly, the rhyme about not drinking the pink is the same for every birthday and it gave my son the opportunity to join in with the “just don’t drink the pink” line with a big smile on his face. He can read perfectly well himself but it made it a nice joint endeavour. Thirdly, the story is fun and magical. There’s a sad element to it but it’s tempered by an uplifting ending. Finally, the illustrations are gorgeous and complement the story perfectly. They’re colourful and give an accurate depiction of what is happening in the story.

I really can’t praise this book highly enough. Be aware, it does deal with the death of a relative but it’s sensitively done and although my son did feel a bit sad at that bit, he bounced back with the ending. It’s a fabulous little read for the 3-8 age group. BCR Fegan is a multi-award-winning author who has written a number of fairy tales and fantasies for children and young adults.

Raised on a small hobby farm only minutes from some of Australia’s greatest beaches, Fegan grew up inspired by the power of natures ambience. From the intensity of the frequent summer storms, to the overwhelming serenity of a lonely beach in the early hours of the morning. His ravenous appetite for both reading and writing soon saw him drawing on the transformational influence of the world around him to craft short stories, poems and picture books

As time wore on, Fegan also found inspiration in the magic and depth of authors and compositors like Hans Christian Andersen, the Brothers Grimm and Charles Perrault. He was mesmerised by the potency of small but beautiful phrases that were carefully carved from the minds of Samuel Taylor Coleridge, Alfred Lord Tennyson and Robert Frost. He grew to appreciate the worlds meticulously created by David Eddings, JRR Tolkien and CS Lewis.

Eventually, he began to forge his own complete works. Weaving his own magic, piecing together his own phrases and crafting his own worlds. Agonising over plots that would inspire, characters that would be loved and circumstances that would delight. In time, his efforts saw a number of children’s books and young adult fiction produced. Through the efforts of TaleBlade Press, these works are now being published with that same careful dedication.