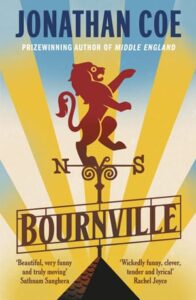 Posted on 5th December 2022 By Nicola

Bournville was published by Penguin Viking on 3rd November and is available in hardcover, eBook and audiobook.

In Bournville, a placid suburb of Birmingham, sits a famous chocolate factory. For eleven-year-old Mary and her family in 1945, it’s the centre of the world. The reason their streets smell faintly of chocolate, the place where most of their friends and neighbours have worked for decades. Mary will go on to live through the Coronation and the World Cup final, royal weddings and royal funerals, Brexit and Covid-19. She’ll have children and grandchildren and great-grandchildren. Parts of the chocolate factory will be transformed into a theme park, as modern life and the city crowd in on their peaceful enclave.

As we travel through seventy-five years of social change, from James Bond to Princess Diana, and from wartime nostalgia to the World Wide Web, one pressing question starts to emerge: will these changing times bring Mary’s family – and their country – closer together, or leave them more adrift and divided than ever before?

Bournville is a rich and poignant new novel from the bestselling, Costa award-winning author of Middle England. It is the story of a woman, of a nation’s love affair with chocolate, of Britain itself. This book is set in Bournville in Birmingham where the famous Cadbury’s factory produced some of the nation’s favourite chocolate bars. It follows four generations of a family in seven sections which cover some of the most famous events of the last 75 years including the coronation, a royal wedding and funeral, the 1966 World Cup and the covid pandemic. As somebody who enjoys reading about 20th century history and loves social history, this book was a dream for me to read.

Although the four generations start with Doll, it’s her daughter Mary who is the hub of the story, and her children and grandchildren who experience alongside her some of the most memorable times in recent history. I liked how their own family situations were woven in with these events. Whilst they went about their own business and had their own personal family experiences, they were encountering the same historical happenings as the rest of us which fostered a kind of solidarity with me as a reader.

I was enthralled by this book really and just soaked up the social detail. I always enjoy a good family drama. Whilst the Lamb family have their ups and downs, Bournville is just as much about the everyday and the way we all experience the ebbs and flows of life against a backdrop of constant evolution. I found it fascinating to follow the family through the years and to witness the changes they saw. I smiled, laughed and cried – the ending felt particularly poignant and the author’s note at the end only added to that.

Bournville is a superb novel. It could be about any one of us and our family history and that’s what makes it such a strong and engaging read. Changing attitudes, the rise of technology, the end of a war, Brexit, it’s all contained between the covers and it had me engrossed from start to finish.

Jonathan Coe was born a few miles from Bournville in 1961. The author of political satires such as What a Carve Up! and Number 11, and family sagas such as The Rotters’ Club and The Rain Before It Falls, his novels have won prizes at home and abroad, including Costa Novel of the Year and the Prix du Livre Européen (both for Middle England).