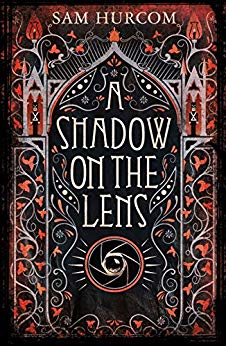 Posted on 6th September 2019 By Nicola

Welcome to my stop on the blog tour for A Shadow on the Lens by Sam Hurcom. I’m reviewing the book today and would like to thank Alex Layt from Orion for the proof copy of the book for review purposes and Tracy Fenton of Compulsive Readers for the place on the tour.

1904. Thomas Bexley, one of the first forensic photographers, is called to the sleepy and remote Welsh village of Dinas Powys, several miles down the coast from the thriving port of Cardiff. A young girl by the name of Betsan Tilny has been found murdered in the woodland – her body bound and horribly burnt. But the crime scene appears to have been staged, and worse still: the locals are reluctant to help.

As the strange case unfolds, Thomas senses a growing presence watching him, and try as he may, the villagers seem intent on keeping their secret. Then one night, in the grip of a fever, he develops the photographic plates from the crime scene in a makeshift darkroom in the cellar of his lodgings. There, he finds a face dimly visible in the photographs; a face hovering around the body of the dead girl – the face of Betsan Tilny.

I was utterly fascinated by the blurb for A Shadow on the Lens. Thomas Bexley is one of the first forensic photographers and in 1904 is called to a small Welsh village to investigate the grisly death of a young woman, Betsan Tilny. The village of Dinas Powys is a strange place, full of hidden people, curtain twitchers and odd folk. Thomas cannot hope to get anything coherent out of them really.

This is a very atmospheric novel with a nod to the supernatural. The village provides a very claustrophobic setting for Thomas’ investigations. Despite everyone calling him Inspector, he is not a police officer, but he is engaged by the police to investigate on their behalf. This did strike me as rather unusual but certainly lends a different slant to the usual murder mystery.

Just like Thomas, I had no clue who the murderer was going to turn out to be and the author is certainly skilled in leading the reader down one path only for it to turn out to be a dead end. I can’t say I took to any of the characters but I don’t think I was supposed to really. They’re an odd bunch to say the least.

A Shadow on the Lens is an interesting read, quite an unexpected one from my point of view in that I didn’t expect the supernatural aspect or indeed the gothic horror. I certainly wouldn’t have wanted to visit Dinas Powys in 1904! This is a great read for the historical fiction fan, especially those who love a creepy and enclosed setting. Oh, and I must just mention that there’s a map of the village. I know how much some readers love a map! I certainly do. Sam Hurcom was born in Dinas Powys, South Wales in 1991 and holds an MA in Philosophy. He has had several short stories published and has written and illustrated a number of children’s books. Sam currently lives in the village he was raised in, close to the woodlands that have always inspired his writing.

A Shadow on the Lens is his debut novel and will be published by Orion in 2019.