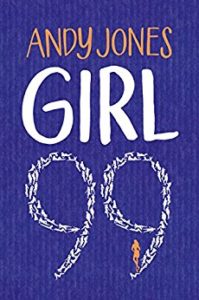 Woo hoo! I’m delighted to be posting about Girl 99 by Andy Jones which is published today. As it’s an extract tour I have a fantastic extract to share with you and I also have a review for your delectation too.

First of all, what’s it all about?

When Tom’s girlfriend walks out on him the day before Christmas, he feels humiliated but not necessarily heartbroken. Sadie wasn’t, after all, The One. If we’re being precise, she was number eighty-five.

And so, for reasons that are only mostly wrong, Tom embarks on a mission to bring his number of encounters up to a nice neat one hundred.

Everything is going, if not well, then at least according to plan…and then Tom meets Verity. Whether she’s The One remains to be seen, but she’s certainly more than just another number.

To set up the extract for you, Tom has recently broken up with his girlfriend Sadie. On hearing this news, Tom’s sister Bianca admits that she never really saw Sadie as ‘The One’ for Tom. In this sample, Tom is reflecting on the idea of a perfect partner, a soul-mate, ‘The One’.

Bianca said Sadie wasn’t ‘The One’ for me. But should this come as any kind of surprise?

Of the seven billion – 7,000,000,000! – humans out there, how likely is it that your One works in your office, drinks in your local, goes to your school, turns up at your Halloween party? You’ve got more chance of winning the lottery with a found ticket. Of course Sadie wasn’t The One. A better question would be: is there a One?

I sincerely hope not. I mean, what kind of cruel trick would that be? How could you ever rest, ever be happy, knowing that somewhere – in some house, high-rise, hovel, hut, shack, castle, tower, palace or frigging igloo – your One, your only, is patiently waiting for you to arrive and sweep her clean off her snowshoes. And it’s not that I’m some hopeless unromantic. Love, monogamy, happily ever after – I believe in all of those things, want all of those things, really I do. But I don’t believe they’re going to arrive on the end of a lightning bolt. I don’t believe that capital ‘O’ comes fully formed. Rather, there are various, potential, lowercase ‘ones’ – the few, the several, the many – but not ‘The One’. And with patience, perseverance and an open mind, maybe, if you’re lucky, one of those ones will turn into a . . . fuck, what do I know?

Hope that has whetted your appetite for this brilliant book but if you need any further tempting, here is my review.

I must admit that I was ever so slightly dubious about the content of this book. A man sets out to take his tally of conquests to a nice round 100 – what a great guy he must be. Except……Tom is actually a really nice guy and I absolutely couldn’t help but like him. I’m not sure how Andy Jones managed it as it could have descended into something quite different, a very blokey sort of read, but instead it’s a heart-warming and incredibly readable story.

As he lurched from woman to woman I had the urge to reach into the book and shake Tom but I hoped that he would come to his senses before I got to the end. I won’t say if he does or not but suffice it to say that this sort of book usually ends on a happy note.

With a hint of the Mike Gayle to it, I thought this was a brilliant, funny read and I think most people would enjoy it, male or female. It’s by no means a frothy love story but it is mostly quite light-hearted. The characterisations are spot on. In particular I loved Douglas, Tom’s neighbour and Tom’s dad who were quite similar characters actually.  Tom works in television advertising and I presume the author drew from his own experiences there as it’s described really well and in some detail.

Once I had got into this book I found myself racing through it. I couldn’t put it down as I followed Tom on his collision course of a love (or sex) life. It made me smile and it made me sad (his friend, El, in particular).

Whilst I could have expected to enjoy Girl 99, it completely exceeded my expectations and I’m really looking forward to reading more of Andy Jones’s work. Just the thing when you need something to make you smile.

Finally, a word for the rather lovely cover. Reading it on my Kindle I didn’t spot the detail until I went back to it when I’d finished reading. I then spotted that the numbers are made up of 49 woman with another 1 standing up to make Girl 99. Really quite clever!

Thank you to Andy Jones for the review copy and for letting me be on his extract tour.  Girl 99 is published today by Lake Union Publishing.

Why not go and check out some more extracts with the other fab blogs on the tour. Andy Jones lives in London with his wife and two little girls. During the day he works in an advertising agency; at weekends and horribly early in the mornings, he writes fiction.