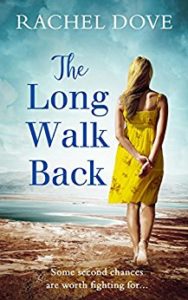 I’m delighted to be taking part in the blog tour today for The Long Walk Back by Rachel Dove. It’s such a fabulous read and I’d like to thank Brook Cottage Books & HQ Digital for the place on the tour and the review copy.

I’m reviewing the book today and also have an extract and a giveaway to win a signed copy of the book. First, let’s see what the book is about:

Having already read The Flower Shop on Foxley Street by Rachel Dove, I was intrigued to read another of her books. To be honest, The Long Walk Back sounded quite different, harder-hitting and much more emotive, and I was right, it’s both of those things but it still has that romantic feel that the previous book had.

In this book we meet Kate, an orthopaedic surgeon who, looking for something different, a new challenge, is spending a few months working as an army trauma surgeon. One day she is called upon to make a life-changing decision on behalf of Captain Thomas Cooper, a man injured in battle. It’s quite obvious where things are going with these two and it leads to a story of love, with many ups and downs along the way.

Kate has more than Cooper to contend with as her family life is also challenging, to say the least. Kate and Cooper are both obstinate people and clash a lot but they’re also drawn to each other like moths to a flame. This relationship between them is beautifully written and so full of emotion, I really felt it coming through the words to me as I read. I particularly liked Cooper – what a guy! Strong, caring, considerate, an action hero – wow!

I was impressed at the research the author must have done, not only about war zones and life as an army medic, but of what happens when the injured return home, how they cope etc. It gave me an insight into it all, although I did think Cooper adjusted rather too quickly and rather too well, but maybe some people do.

The Long Walk Back is a lovely read. It’s a story of hope, human spirit, intense love, carrying on against the odds.  Ultimately, it’s an uplifting story and I enjoyed it very much.

Kate was in a real mood; Trevor could tell from the way she pounded across the tent to him. He was doing his rounds, and they had had a good night. A good night here was when they still had the same number alive as the day before. A great day was when there were no casualties at all, but Trevor was hard pushed to remember many days like that.

‘Who’s upset you? Neil whingeing about doing the dishwasher again, is he?’ Trevor asked, and immediately regretted cracking the joke when the icicles from Kate’s frosty glare jabbed him in the chest.

‘Captain Cooper thinks he is hilarious. I’m just waiting for him to call me ‘toots’ and slap me on the behind,’ Kate said, seething. Trevor checked the vitals on his sleeping patient, and satisfied, made notes on his chart.

Kate,’ Trevor admonished, trying not to laugh at her furious expression. ‘How are his vitals?’

Kate pursed her lips, taking a breath to focus on the job. ‘He’s stable, the chest drain is working well. I’m still concerned about his leg though. He has limited blood flow to the area, and I’ m worried about sepsis.’

Trevor nodded sadly. ‘So he will probably lose the leg, if we try to keep him alive.’ He rubbed at his temples. ‘Not told him any of this, have you?’

Kate shook her head. ‘I told him you would explain on this morning’s ward round. I wanted to go through everything again, monitor him closely for as long as we safely can before we make a decision.’

Trevor looked at her, his face unreadable. ‘It may not be our decision, it’s up to him.’

Kate looked nonplussed. ‘The evac chopper is coming in two days. At present, he’s too unstable to move. We need to get him home then, leg or no leg. A decision between losing a limb and dying is not a great thing to have thrust at you, granted – but he wants to live, surely?’

Trevor placed the chart at the foot of the bed and started to walk towards the next patient, issuing medication instructions to the nurse as he walked.

‘Kate,’ he began in a tone he might have used to tell his child that Father Christmas wasn’t real. ‘I have worked on men like Captain Cooper since this whole nightmare started. These are army men to the core. Sometimes going home means no family, no buddies, no job, and a lifetime of relying on other people. They are proud, and sometimes, to them, the reality is worse than death. Don’t take anything for granted when it comes to patient wishes.’

‘A boy died yesterday, to save these men. Surely that’s reason enough to want to live?’

Kate ran her fingers through her hair, suddenly feeling tired all over again.

‘Cooper knows that. Better than most, probably. It’s still his decision, he has to live with it. Understood?’ Trevor spoke firmly now.

Kate opened her mouth to argue, but she thought better of it. She respected her mentor, always had, and she didn’t want to argue. Not when the fact that life was so short and precious was evident in every face, every feature she saw over here. ‘Understood.’