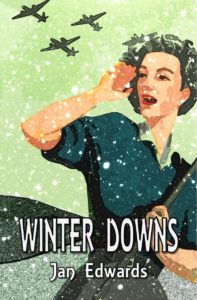 I’m delighted to be part of the blog tour for this book. Just look at that gorgeous cover. I have a review for you further down this post but first here’s the blurb and an extract from chapter 1.

In January of 1940 a small rural community on the Sussex Downs, already preparing for invasion from across the Channel, finds itself deep in the grip of a snowy landscape, with an ice-cold killer on the loose.

Bunch Courtney stumbles upon the body of Jonathan Frampton in a woodland clearing. Is this a case of suicide, or is it murder? Bunch is determined to discover the truth but can she persuade the dour Chief Inspector Wright to take her seriously?

Bunch slid from the saddle and walked to the trees but stopped just short of them as she glimpsed a motionless figure seated between the trunks.  ‘Hey, you there.’ Bunch edged forward. There had been many displaced people passing through in recent months, people who might take refuge in the wood, but it took a strange sort of person who did not to react to Roger’s noise. ‘Hello? Are you all right? Are you … oh, good heavens.’  She caught hold of Roger’s collar and tugged him into a sit as she realised what she was seeing.  ‘Dear God,’ she muttered.

A man was slumped in the bowl of a split tree. His hands hung loosely along thighs, legs stretched out before him. His head lolled forward obscuring what was left of its features. The rear of his skull had been blown away and smears of dark pinkish brain matter had spattered across the bark immediately behind, dotted with shards of bone.

Bunch flexed her fingers against the blood rush tingling through them and released one deep breath before taking another, and edged forward for a closer look. Though she could not see his face she knew this was not the corpse of someone unknown. This body had a name, and she would have known him anywhere. Calm, she told herself, be calm.

Bunch recognised the Westley Richards near the dead man’s feet and it left little doubt as to what had caused the massive damage to his skull. She clapped a hand across her mouth to stop her stomach adding more colour to the scene. She had seen a few corpses during her brief stint driving BEF staff cars in France. Many of the corpses had been far more mutilated than this one. Beside, they had been different. They had lacked identity but this corpse had a face and a name that Bunch had known all of her life. This body had not been slaughtered by a mindless steel capsule packed with explosives, dropped from far above. This corpse had come to be through a deliberate and very personal act of violence. This was Jonathan Frampton.

She wiped at her eyes and shuddered out another draconic steaming into the cold air. Pull yourself together. Never waver. That’s the Courtney way.  ‘Oh Jonny,’ she whispered, ‘what in hell has been going on here?’ Bracing herself for the routine she had last practised with the First Aid Nursing Yeomanry, Bunch crouched to feel beneath his collar for the carotid artery though she knew finding a pulse would be highly unlikely. His flesh was cold in the refrigerating winter wind and unyielding to her touch, but not yet fully stiffened in rigor. The red splattering all around was dulling to brown, telling her that the blood had ceased flowing several hours ago. Long before those shots we’d heard just moments ago.

I was initially drawn to this book because of the cover which is so attractive and very 1940s. The story is a really interesting premise as we follow Rose Courtney, known as Bunch, as she becomes an amateur sleuth when her friend, Jonathan, is found shot dead in the woods. It appears to be suicide but Bunch is not convinced and she’s determined to prove that it’s really murder.

Bunch is a strong female character and as a member of the aristocracy she’s a little unusual for her time, age and position in that she is unmarried and doesn’t particularly mind about it. I thought she was an excellent character and very well portrayed. I liked her relationship with her sister, Daphne, known as Dodo, and I particularly enjoyed their grandmother who is a really feisty lady.

It’s quite an atmospheric story and gives a nice snapshot of the times. Bunch’s home has been taken over for war reasons, rationing is a big part of the story, everywhere is in turmoil and there’s snow on the ground thwarting the investigation. All this is described well by the author and I found it easy to imagine the various settings.

Despite all this I must admit that I found this book quite hard to get into for some reason. It is a very good example of a period murder mystery and I can imagine it will appeal to those readers who like a good old-fashioned whodunnit. There is no fault with the book, I just think it turned out to be not quite my thing. Maybe I’ve just got so used to a different kind of thriller that this cosy crime type story just didn’t grab me in the same way. Nevertheless, I think the author has done a great job with what I believe is the first in a series featuring Bunch Courtney.

With thanks to the author for the review copy. Winter Downs is was published on 29th May 2017 by Penkhull Press and is available as an ebook. Jan Edwards is a Sussex-born writer now living in the West Midlands with her husband and obligatory cats. She was a Master Locksmith for 20 years but also tried her hand at bookselling, microfiche photography, livery stable work, motorcycle sales and market gardening. She is a practising Reiki Master. She won a Winchester Slim Volume prize and her short fiction can be found in crime, horror and fantasy anthologies in UK, US and Europe; including The Mammoth Book of Dracula and The Mammoth Book of Moriarty. Jan edits anthologies for The Alchemy Press and Fox Spirit Press, and has written for Dr Who spinoffs with Reel Time Pictures.