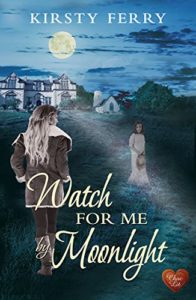 #blogtour – Watch for Me By Moonlight by @kirsty_ferry @BrookCottageBks #bookreview #extract

I’m so happy today to be part of the blog tour for Watch for Me by Moonlight by Kirsty Ferry. Thank you to Choc Lit and Brook Cottage Books for the review copy and the place on the tour. I have my review for you along with an extract but first let’s see what the book is about.

“It was the first full moon since that night. She waited and watched by moonlight, as she had promised …”

When her life in London falls apart, Elodie Bright returns to Suffolk and to Hartsford Hall, the home of her childhood friend Alexander Aldrich, now the Earl of Hartsford. There, she throws herself into helping Alex bring a new lease of life to the old house and its grounds.

After a freak storm damages the Hall chapel and destroys the tomb of Georgiana Kerridge, one of Alex’s eighteenth-century relatives, Elodie and Alex find a connection in the shocking discovery brought to light by the damaged tomb.

Through a series of strange flashbacks and uncanny incidents, they begin to piece together Georgiana’s secret past involving a highwayman, a sister’s betrayal and a forbidden love so strong that it echoes through the ages …

This is my first Kirsty Ferry but I’ve always had a feeling I would like her books. I already had two of them on my TBR pile but thought I would give this one a try first. I was right, I did enjoy her work. It’s romance through and through, and that’s not always something I like too much of, but Watch for Me By Moonlight is a really lovely read.

Elodie Bright has returned to Suffolk following a disastrous marriage and a successful career in London. Suffolk is where she grew up with Alex Aldrich, who has inherited the Earldom of Hartsford. Elodie has a gift – she sees people from the past – and she finds herself reliving the story of Alex’s ancester, Georgiana, after a storm causes her tomb to be damaged.

I thought this was a clever story. There were parts that I thought were inevitable but there were also surprises. I really enjoyed the love stories which I found to be beautifully written, tender and sweet.

There are supernatural elements and Kirsty Ferry did a good job at putting them across so they were believable. I found it a fascinating strand of the book as we learned along with Elodie and Alex about his ancestors. It’s time slip but with a difference as they experience almost first hand what the people in the past were experiencing.

I particularly liked the historical aspects, not just the scenes set in the past but also the fact that Alex’s home is Hartsford Hall, with all the history that goes with such a place.

This is the first in the Hartsford mysteries but it also features, albeit quite loosely, characters from the Rossetti series of books. I thought it was a nice touch and when I get round to reading those books it will be interesting to spot the characters.

All in all I found this book a pleasure to read. An easy one yes, but not lacking the substance needed to keep me interested in a romance novel.

Elodie had no idea how she made it to the church so quickly when she could barely see anything for the rain bucketing down in front of her eyes.

Pushing her way out of the gift shop, she ran, ploughing through mud and churned up grass, splashing through ankle deep puddles. Water was fountaining out of the drain covers like so many geysers, but Elodie didn’t look down, didn’t look to see where her feet were going. Her trainers would need to be binned and her clothes would probably never dry out again, but who cared? She just kept her sights on the church.

Against the shadows, she saw a tall figure running towards the place and knew instinctively who it was.

‘Alex!’ The wind tore the words out of her mouth and blew them somewhere towards Norfolk.

He reached the church moments before she did and stopped short at the door.

This time he heard her and spun around, rain dripping off his messy dark hair and into his midnight-blue eyes. ‘The roof, Elodie, it’s been hit. I was in the greenhouse. I saw it happening.’

‘I know!’ She drew up next to him, quite breathless. ‘I saw it too, from the gift shop.’ She hurried past him and put one hand on the ancient bronze door handle, but Alex’s hand came down on her wrist and held it in place.

Elodie relinquished the handle and hovered near him as he pulled the door open.

They both coughed as a cloud of dust and plaster came out, but thankfully there was no smell of burning.

‘Thank God,’ said Alex, clearly expecting the worst. ‘I’m still going in first though. You stay here until I call you.’

‘Okay. But come right back out if it’s looking bad!’

‘Don’t worry, I won’t hang around if it is.’ He disappeared into the building and Elodie peered anxiously in after him. After what seemed like an age, he called out to her. ‘It’s pretty grotty, but safe enough I think. The Lady Chapel got the worst of it. You can come in if you’re careful. But if it’s too much for your asthma, go straight back out.’

‘I will. But the poor Lady Chapel!’ Her heart pounding, she hurried into the church. As she stood there in the dark with the modern-day emergency lighting glowing in the rafters, and tiles smashed beneath her feet, and one of the beams hanging at a crazy angle from the ceiling to the floor, and one candle still miraculously lit and flickering wildly in an alcove near the altar, Elodie fought back the worst feeling of dread she’d ever experienced in her life.

The Lady Chapel, which housed Georgiana’s tomb, was behind the fallen beam and rain was streaming down as if someone had aimed a garden hose through the roof. If anywhere in the place had suffered the worst from the lightning strike, it was, as Alex had said, that area. It had been built on to the church especially for Georgiana’s monument and never seemed to be quite fully part of the old building. The storm had obviously decided that the time had come to sever the connection completely – and it just felt all wrong, somehow. Damn.

‘I have to check Georgiana!’ Elodie scrambled over the rubble and crunched her way towards the Lady Chapel.

‘You’re not going over there on your own! God knows what it might be like. I’m coming with you.’ Alex tossed some bits of wood out of the way and followed her. With difficulty, they climbed over the beam and choked their way through the plaster cloud, the rain still hammering down and bouncing off the stone floor, but doing little to dampen the dust. Elodie felt the tell-tale tightening in her chest that warned of lungs that weren’t particularly happy in that sort of environment, but she had other things to think about and tried to ignore it.

She’d never forget what she saw after that – Georgiana’s beautiful marble tomb was split, right down the middle. It was as if the lightning strike had come straight through the roof and pierced the heart of the monument. It was all sort of broken in half and the place wasn’t filled with plaster dust: it was more like a mist of marble fragments. There were shards of the stuff scattered around and huge parts of the figure were shattered too. Even Georgiana’s lovely face was cracked from forehead to chin, yet she still looked so, so peaceful. And with the rain flowing over her cheeks, it seemed as if she was crying.

‘Oh, Georgiana!’ Elodie whispered and reached out, touching her hair.

There was an ominous creaking and groaning – then: ‘Look out!’ Alex grabbed hold of her arm and pulled her towards him as the whole tomb collapsed in on itself. The side fell off and Alex yanked Elodie out of the way. She lurched into him and automatically buried her head in his sopping wet chest. Then there was a horrible silence and all she could hear was the rain pounding on the wreckage of the tomb and Alex’s heart beating.

The silence was broken by Alex swearing.

If you fancy reading Watch for Me by Moonlight then here are all the links you need.

Kirsty is from the North East of England and won the English Heritage/Belsay Hall National Creative Writing competition in 2009 with the ghostly tale ‘Enchantment’.

Her timeslip novel, ‘Some Veil Did Fall’, a paranormal romance set in Whitby, was published by Choc Lit in Autumn 2014. This was followed by another Choc Lit timeslip, ‘The Girl in the Painting’ in February 2016 and ‘The Girl in the Photograph’ in March 2017. The experience of signing ‘Some Veil Did Fall’ in a quirky bookshop in the midst of Goth Weekend in Whitby, dressed as a recently undead person was one of the highlights of her writing career so far!

Kirsty’s day-job involves sharing a Georgian building with an eclectic collection of ghosts – which can sometimes prove rather interesting.