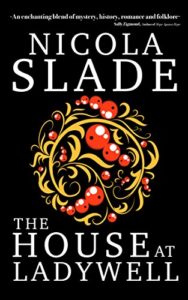 I’m absolutely delighted to be taking part in the blog tour today for Nicola Slade’s book, The House at Ladywell. I had a feeling this one would be right up my street and I was right. I’ll be sharing my review with you and an extract, and there’s also a chance to win one of Nicola’s previous books, The Art of Murder, but first here’s what the book is all about:

A hare carved in stone and the scent of flowers in a house full of echoes – can Freya’s inheritance help her to leave the past behind?

Had I gone completely crazy that first day? To open the door, take one astonished look round, and decide on the spot that I would live there?

To fall in love with a house?’

When Freya Gibson inherits an old, run-down property she has no idea she is the last in a long line of redoubtable women, including the Tudor nun who built the house. Unknown to Freya these women, over centuries, fought with whatever weapons came to hand – deception, endurance, even murder – to preserve their home and family.

Freya falls in love with the house but her inheritance includes an enigmatic letter telling her to ‘restore the balance’ of the Lady’s Well. Besides this, the house seems to be haunted by the scent of flowers.

In the past the Lady’s Well was a place of healing and Freya soon feels safe and at home, but she has demons of her own to conquer before she can accept the happiness that beckons.

‘Something I’d failed to mention to anyone: not to Louise, not when I was enthusing to Patrick, and certainly not to the helpful solicitor, was the letter that had been waiting for me on that first day.

Beside the front door stood a small table on which sat an old walkabout phone in a base station, and two envelopes, one large and the other letter-sized. The smaller envelope was addressed to me.

The handwriting straggled shakily across the page and the contents of the letter startled me.

‘When you were born I knew you were the one. Before anything else you must go into the garden and pick some flowers. It doesn’t matter what you pick: in winter look for leaves, rosemary or winter jasmine, but if it’s summer pick simple flowers – a rose, a sprig of yellow broom, nothing fancy. Pick what you can and weave them into a wreath made from the rowan tree – you’ll know it by the wooden bench underneath. Hang it on the hook inside the front door.

When that’s done, say the words written below, making sure you’re alone. My grandmother had the verse from her own grandmother and so on. I expect the words have altered over time but the spirit remains the same. Show reverence when you do these things but do this first of all. You must not delay.

You must restore the balance.’

It had been a sleety February day, with flowers few and far between but I persevered, driven by the sense of urgency in the letter. I found secateurs in the kitchen. The rosemary was easy, a great, straggling bush standing sentinel by the path, with yellow winter jasmine spread against the wall. In a sheltered spot I found a clump of snowdrops and, to my delight, a primrose or two.

I had to stand on the bench to snip a couple of pliable twigs from the rowan, and back in the house I bent them into a makeshift circle and threaded in the flowers and leaves. Still under the compulsion I’d felt on reading the letter I stood on a chair to hang my creation on the waiting hook.

Saying the words Violet had written made me pause.

‘It sounds like a spell,’ I half-whispered, hushed by the strangeness of it all. Was Violet a witch? Wasn’t this all complete nonsense? I read the words again and summoned up my rusty Latin vocabulary, almost forgotten since ‘A’ Level. ‘Domina means lady; something about water? And leporum – rabbit? No,’ I corrected myself. ‘Lepus is a hare, and benedic – any kind of blessing can’t be bad.’

There was something about the place that I couldn’t explain. I felt safe and – odd as it sounds – wrapped in loving arms. The house was filled with a friendly silence and I felt comforted for the first time in ages. What harm could it do to obey Violet’s last instructions when she given me this precious gift?

I took a deep breath and bowed my head before the ring of twigs and flowers, not in prayer but in a kind of grateful submission, as I quietly murmured the Latin words, stumbling over a rough translation in my head…’

If it sounds up your street too then The House at Ladywell is available now in ebook and paperback – here are the links you need:

Books where a house is a major part of the plot seem to have an invisible rope attaching them to me. They pull me in immediately and I’m rarely disappointed. So you can imagine that The House at Ladywell was a great draw for me. And I’m pleased to say that it didn’t disappoint, in fact I loved it.

Freya Gibson is a woman who has been through a lot and had a really difficult time of it. She then finds herself working for bestselling author, Patrick Underwood. All is going well and then one day she hears that she has inherited a house from a relative she didn’t even know she had. And this is no ordinary house. The scent of flowers seems to linger there, despite there being no flowers in the house. There’s a feeling of belonging for Freya and she straightaway feels a connection and a desire to be there. Right at the beginning she is told she must make a wreath from the rowan tree in the garden and then say an incantation to ‘restore the balance’.

The house is a major character in this novel. We hear of its past through the tales of Freya’s long-gone ancestors. These sections are scattered throughout Freya’s narrative and I did wonder if it would have helped to have the relevant dates and a family tree, but in fact I could fairly easily work out an idea of the timeline and at the end there is some information about the characters and the years their stories are from. I think the dates weren’t provided so that the story could flow and the historical elements could intermingle with the present day ones and that certainly did work well.

The parts from the past were fascinating, so interesting, and they provided a background to the house but I did enjoy Freya’s story most of all as she was the one discovering things about the past, the house and her own life.

There is quite a bit of folklore in this story. Hares play a big part and are revered in fact. I love hares so I liked that they were so important. There’s also a well with water that heals and a real sense that the house and the land are important.

I liked Freya and Patrick as the main characters, but I thought the supporting characters were fabulous too. Mary Draper was just brilliant, and all the other people that Freya meets when she moves to Ladywell add something to the story, however large or small.

This really is such an appealing book. It has modern elements mixed with historical, a love story, and mysteries galore. It’s fabulous! Nicola Slade had her first short stories published in her early twenties and wrote for children and for women’s magazines while her three children were growing up.

Nicola’s books are all set in Hampshire and include the romantic comedy, ‘Scuba Dancing’, and two cosy mystery series. The Charlotte Richmond books set in 1858 feature a young widow with a shady past and a habit of stumbling over the occasional corpse and the contemporary Harriet Quigley mysteries, featuring a retired headmistress and her cousin and sidekick, the Rev. Sam Hathaway.

Nicola lives in Hampshire with her husband, and as well as writing she belongs to a local art workshop; among other things she has been a Brown Owl and an antiques dealer.