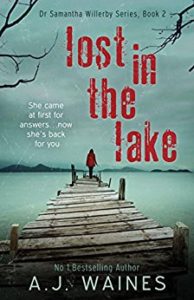 Posted on 8th September 2017 By Nicola

I’m delighted to be on the blog tour today for Lost in the Lake by A J Waines, which was published yesterday. I’m sharing my review with you but first here’s what the book is about:

Did I make you jump? Turning up like that in your own kitchen? You have to admit, it must have been a nasty shock.

This thrilling opener is how Lost in the Lake starts. It’s the second in the Samantha Willerby series but can be read as a standalone. In fact, despite my best intentions, I haven’t read the first one yet and whilst the events from that book are referred to throughout this book it’s only by way of background rather than essential information.

Sam is a clinical psychologist who takes on a patient, Rosie, who was in a van that plunged into a lake in the Lake District and Rosie was the only person who managed to get out. How damaged is Rosie and how involved should Sam become with one of her patients, no matter how needy?

I have the feeling that Sam is the sort of character who is constantly getting into ‘situations’. She’s a little impetuous and doesn’t always follow the rules of her profession. I think she’s a little damned if she does and damned if she doesn’t with this and maybe her judgements aren’t always the best. But I liked her a lot and think she’s an interesting and fairly complex character.

The story is told in turns by Sam and Rosie in the first person. For the first part of the book I struggled a little in switching from one to the other but then I started to understand their personalities and by the half way point I was ready to race through to find out more about the crash, Rosie’s psyche, the missing viola and the violin that was worth a fortune.

I thought Lost in the Lake was a well-plotted thriller with two very different protagonists who are both fascinating in their own ways. I found it quite sinister in places and I thought it was clever to show the story from both sides. All in all a truly good read.

With thanks to the author for the review copy and the place on the blog tour. Lost in the Lake is available now in ebook (just 99p!) and paperback.

Here are the details of the other blogs taking part in the tour.