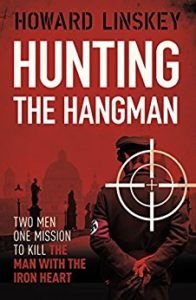 I’d like to wish Howard Linskey a very happy publication day. I’m so pleased to be on the blog tour for this amazing book.

Bestselling author Howard Linskey’s fifteen year fascination with the assassination attempt on Reinhard Heydrich, the architect of the holocaust, has produced a meticulously researched, historically accurate thriller with a plot that echoes The Day of the Jackal and The Eagle has Landed.

2017 marks the 75th anniversary of the attack on a man so evil even fellow SS officers referred to him as the ‘Blond Beast’. In Prague he was known as the Hangman. Hitler, who called him ‘The Man with the Iron Heart’, considered Heydrich to be his heir, and entrusted him with the implementation of the ‘Final Solution’ to the Jewish question: the systematic murder of eleven million people.

In 1942 two men were trained by the British SOE to parachute back into their native Czech territory to kill the man ruling their homeland. Jan Kubis and Josef Gabcik risked everything for their country. Their attempt on Reinhard Heydrich’s life was one of the single most dramatic events of the Second World War, with horrific consequences for thousands of innocent people.

Hunting the Hangman is a tale of courage, resilience and betrayal with a devastating finale. Based on true events, the story reads like a classic World War Two thriller and is the subject of two big-budget Hollywood films that coincide with the anniversary of Operation Anthropoid.

Hunting the Hangman is a truly fascinating story, made all the more so by the fact that it’s a true one. It took 17 years between Howard Linskey having the idea for the book and it finally being published. The beauty of it is that almost all of it is absolutely true to the real events, with only small amounts being imagined where necessary.

I didn’t know anything about Reinhard Heydrich before starting to read this book so had no idea what happened and whether Kubis and Gabcik were successful in their assassination attempt. I was glad about that as I think it made a greater impact on me not knowing their fate.

I did struggle at times with remembering who was who and reading on a Kindle makes it a bit harder to keep flicking to the beginning where there is a list of the key personnel. But I just went with it and started to get to know the characters and their place in the story.

This is a very accomplished factual thriller novel. I think it’s always hard to write fiction about true events. I love books based around things that really did happen and real people but it can restrict an author I think. In this case, Linskey has done a sterling job. It’s not my usual sort of read but I stepped out of my comfort zone this time and feel glad that I have read such an important story about the impact of war.

This is a story of immense bravery versus evil and an exhilarating story of derring-do which gripped me throughout.

With thanks to the publisher and Anne Cater for the review copy and the place on the blog tour. Hunting the Hangman is published by No Exit Press in ebook and paperback today!

Don’t forget to check out the other fab blogs on the tour. There is a mixture of reviews and guest posts for you to read. Howard Linskey is the author of three novels in the David Blake crime series published by No Exit Press, The Drop, The Damage and The Dead. Harry Potter producer, David Barron optioned a TV adaptation of The Drop, which was voted one of the Top Five Thrillers of the Year by The Times. The Damage was voted one of The Times‘ Top Summer Reads. He is also the author of No Name Lane, Behind Dead Eyes and The Search, the first three books in a crime series set in the north east of England featuring journalists Tom Carney & Helen Norton, published by Penguin. His latest book, Hunting the Hangman, is a historical thriller about the assassination of Reinhard Heydrich in Prague during WW2.

Originally from Ferryhill in County Durham, he now lives in Hertfordshire with his wife Alison and daughter Erin.