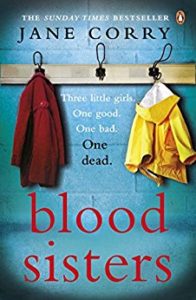 I’m so happy to be on the blog tour for Blood Sisters today. It’s such a brilliant read that I had a real book hangover afterwards and my next book took a little getting into. Here’s what it’s all about:

THREE LITTLE GIRLS SET OFF TO SCHOOL ONE SUNNY MORNING.
WITHIN AN HOUR, ONE OF THEM IS DEAD.Two women. Two versions of the truth.

Kitty lives in a care home. She can’t speak properly, and she has no memory of the accident that put her here. At least that’s the story she’s sticking to.

Art teacher Alison looks fine on the surface. But the surface is a lie. When a job in a prison comes up she decides to take it – this is her chance to finally make things right.

But someone is watching Kitty and Alison.
Someone who wants revenge for what happened that sunny morning in May.
And only another life will do…

Well, this was a twisty sort of read! Just when I thought I knew what was going to happen it threw a curveball at me.

Alison is one of the main characters in this story. She’s in her mid-30s and is still suffering the after-effects of an accident when she was 18. Not physical after-effects but psychological ones. The accident left her 11 year old sister, Kitty, brain-damaged. We hear from Alison and Kitty in 2017 and back in 2001 around the time when the accident happened.

I enjoyed hearing from both protagonists. Alison’s story is compelling and a real page turner and then Kitty, trapped in her body, able to think but unable to speak, is fascinating. What secrets does she hold?

Alison takes a job working as artist-in-residence at an open prison and what a brilliant setting this was. It really ramped up the tension as Alison didn’t know who she could trust. Even more interesting is the fact that the author held a similar position in a prison herself.

This book wasn’t quite what I was expecting and I think it was because of the tagline which refers to three little girls. Except Alison was 18 so not so little. Once I had got my head around that I was absolutely engrossed in this fantastic psychological read.

There’s so much going on in this story. It’s a 450-odd page read so fairly lengthy but it flew past. Relatively short chapters helped and the cliffhangers that appeared often at the end of them kept me turning those pages as fast as I could.

I think that, as with all psychological thrillers, there’s an element of the fantastical about it. To make it into that twisty read I mentioned earlier there has to be some fairly unlikely events and circumstances (everyday life can be a bit too mundane to write about) but if it’s done well, as it is here, then it still works.

The story unfolds quite slowly as we are given little bits of information about the past. This just added to the tension for me. I thought it was such a well written story. Unfortunately, at times I did have to put it down otherwise I would describe it as unputdownable. It’s a fantastic read!

With thanks to Penguin and Annie Hollands for the review copy and the place on the blog tour. Blood Sisters is available now in ebook and paperback.