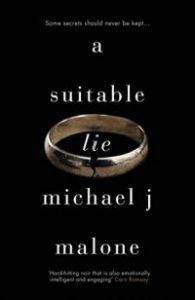 Andy Boyd thinks he is the luckiest man alive. Widowed with a young child, after his wife dies in childbirth, he is certain that he will never again experience true love. Then he meets Anna. Feisty, fun and beautiful, she’s his perfect match… And she loves his son, too. When Andy ends up in the hospital on his wedding night, he receives his first clue that Anna is not all that she seems. He ignores it; a dangerous mistake that could cost him everything. A brave, deeply moving psychological thriller which marks a stunning departure for one of Scotland’s top crime writers.

I must admit that, given the current trend for psychological thrillers, I was expecting something slightly different when I started this book.  What I got was a page-turner of a domestic noir.  Andy Boyd is a widower with a young son, Pat, when he meets Anna, the woman who seems to be just what both of them need in their lives. But Anna is definitely not what she seems.

What I liked about this book is that it turned the tables and challenged the ‘norm’.  Not only does it represent a bit of a role reversal and something of a taboo subject (although it shouldn’t be) but it’s written by a man from a male viewpoint which really helped to portray exactly how Andy was feeling.  I liked him a lot.  He was down to earth, kind and a genuinely good man.  Anna was portrayed well and if the author intended her to be a thoroughly dislikeable character then he succeeded as far as I am concerned.  I winced many times as I read and I despaired as I followed the events.  I had a few ideas about how it would all end but the author still managed to surprise me when something quite unexpected took place.

I always find these kinds of stories more scary than any serial killer story.  This is something that could happen to anybody.  You think you know somebody but then they turn out to be not at all what they seem and sometimes you have to just live with your choices or try and do the impossible and find a way out.

Another bonus with this book was the setting.  I love Scotland and there was a real sense of place here.  I could imagine the bank where Andy worked and the pubs he drank in, the roads he drove on.

A Suitable Lie is a tightly plotted look at how easily bliss can turn into hell.  It’s got a very personable style to the writing which draws the reader right into the thick of the action.

With thanks to the publishers and New Books Magazine/nudge-books.com for the review copy.  A Suitable Lie was published on 15th September 2016 by Orenda Books.