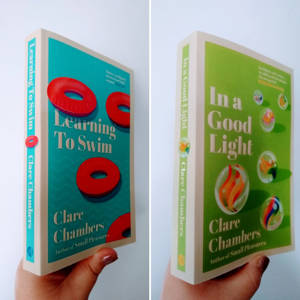 I’m delighted to be celebrating the reissue of Learning to Swim and In A Good Light by Clare Chambers today. Many of you will be familiar with her most recent book, Small Pleasures but maybe not so familiar with her back list. I read both of these books before my records began and was a huge fan of this author’s books but I thought she must have given up writing. Imagine my delight when I saw she had written Small Pleasures.

These two new books are published tomorrow by Arrow with gorgeous and snazzy new covers. I believe the other books on the back list will be published later in the year (I particularly enjoyed The Editor’s Wife). So, if you enjoyed Small Pleasures or just fancy a thoroughly absorbing read then give these two a try. Abigail Jex never expected to see any of the Radley household again.

The Radley’s were extraordinary, captivating creatures transplanted from a bohemian corner of North London to outer suburbia, and the young Abigail found herself drawn into their magic circle: the eccentric Frances, her new best friend; Frances’ mother, the liberated, headstrong Lexi; and of course the brilliant, beautiful Rad.

Abigail thought she’d banished the ghost of her life with them and the catastrophe that ended it, but thirteen years later a chance encounter forces her to acknowledge that the spell is far from broken…

In a Good Light

Without even noticing, Esther Fairchild has become locked into routine.

Living with her adored brother, Christian, she divides her time between illustrating children’s books, nightly shifts as a waitress, weekly visits to her father and fortnightly meetings with her married lover.

Then one day she encounters a face in the crowd which jolts her out of her mundane existence and makes her question both her life and the past that has helped to shape it. Memories she had long chosen to forget begin to resurface. Memories of an eccentric childhood in a large and shabby house, where the children were left to fend for themselves within the loose boundaries of their parents’ unorthodox values. A chaotic existence peopled by a rich collection of feckless ‘guests’.

And into this shambolic world came Donovan – regularly deposited by his unreliable mother – and Penny, Christian’s girlfriend and Esther’s idol. Until tragedy struck and shattered their joint existence. But now, it seems, their lives are about to become intertwined once more . . .

She took up a post as Royal Literary Fund Fellow at the University of Kent in September 2020.