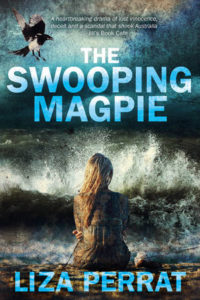 ShortBookandScribes #Extract from The Swooping Magpie by Liza Perrat @LizaPerrat

I’m so pleased to be featuring an extract from The Swooping Magpie by Liza Perrat today. It’s the second (standalone) novel in Liza’s 1970s Australian Family Drama series. First of all, let’s have a look what the book is all about.

The thunderclap of sexual revolution collides with the black cloud of illegitimacy.

Sixteen-year-old Lindsay Townsend is pretty and popular at school. At home, it’s a different story. Dad belts her and Mum’s either busy or battling a migraine. So when sexy school-teacher Jon Halliwell finds her irresistible, Lindsay believes life is about to change.

Lindsay and Jon pursue their affair in secret, because if the school finds out, Jon will lose his job. If Lindsay’s dad finds out, there will be hell to pay. But when a dramatic accident turns her life upside down, Lindsay is separated from the man she loves.

Events spiral beyond her control, emotions conflicting with doubt, loneliness and fear, and Lindsay becomes enmeshed in a shocking true-life Australian scandal. The schoolyard beauty will discover the dangerous games of the adult world. Games that destroy lives.

Lindsay is forced into the toughest choice of her young life. The resulting trauma will forever burden her heart.

Reflecting the social changes of 1970s Australia, The Swooping Magpie is a chilling psychological tale of love, loss and grief, and, through collective memory, finding we are not alone.

The eBook of The Swooping Magpie is now available at the special NEW RELEASE price of 99c/p for a limited time only. I wrinkle my nostrils against the caustic smell of cat piss as we pick our way across the filthy footpath to the black gate.

My mother steps aside as the high gate creaks open, nods at me to go through. I scowl, don’t move.

‘You heard what your father said, Lindsay.’

With a sigh, I push past her.

The storm flushed away, the humidity has seeped back into the air at this tail-end of another scalding Australian summer. There’s no warmth in me though, only ice-blocks freezing my insides so that I become so cold I can’t stop shivering.

It’s not just the fear that sets me quaking, but the helplessness too. Like when I was a kid about to launch myself down the slippery dip. I’d hesitate, knowing that once I slid off there was no turning back, even if the metal burned my bum raw, or that once I reached the bottom I’d tumble forwards and scrape my knees.

My mother nudges me ahead of her. I don’t realise it yet, and I won’t speak of the whole sorry tale for years to come, since every time I thought about it, the memories would leave me frustrated, sad and angry, but I would recall walking through those black iron gates as crossing the threshold into the darkest hell. Liza grew up in Australia, working as a general nurse and midwife. She has now been living in France for over twenty years, where she works as a part-time medical translator and a novelist. She is the author of the historical The Bone Angel series. The first, Spirit of Lost Angels, is set in 18th century revolutionary France. The second, Wolfsangel, is set during the WW2 Nazi Occupation and the French Resistance, and the third novel – Blood Rose Angel –– is set during the 14th century Black Plague years.

The first book in Liza’s new Australian series, The Silent Kookaburra, published in November, 2016, is a psychological suspense set in 1970s Australia.

Liza is a co-founder and member of the writers’ collective Triskele Books and also reviews books for Bookmuse.

Sign up for her new book releases and receive a FREE copy of Ill-Fated Rose, short story that inspired The Bone Angel French historical series.