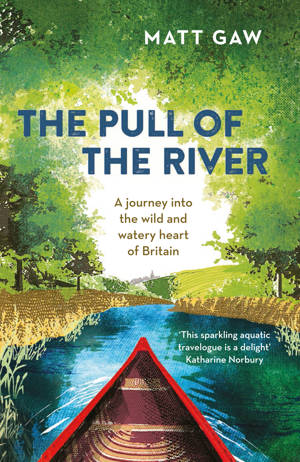 I’m so pleased to be able to share an extract from The Pull of the River by Matt Gaw with you today. It’s ‘A Journey into the Wild and Watery Heart of Britain’ and the extract is about the Great Glen Trail. My thanks to Alison Menzies for asking me to post and to Elliott and Thompson for sending me a copy of the book.

The Pull of the River: A Journey Into the Wild and Watery Heart of Britain by Matt Gaw

From Chapter 10, Into the Wild

“Navigating Lochy now, you’d be forgiven for thinking that the glacier that once filled this rift during the last Great Ice Age had only just retreated. There is an untampered-with oldness that I didn’t expect to see outside of the wilds of Canada or Alaska. It is both stark and beautiful. The water and land combine in a shifting palette of greys, blacks and greens. Grey on the mountain, the sky, the tree trunks crystallised with silver lichen and on the rocks licked wet by the water. Green in the pines and the great puddings of moss that slip towards the loch’s edge. Black in the water itself, like squid ink or starless space.

We had intended to follow the shoreline, but the canal entrance lines us up with the end of the bay, a headland about a mile away, perhaps more. We set off, the wind rising and blowing against us as we head for the horizon, the sky meeting the water in the narrowest of mountain passes. The waves are bigger than I expected and faster. As we ride over one and into its trough, another one hits. The Pipe cuts through to leave a sheet of water that slides over her nose and into James’s lap.

With so much water, so much landscape, it’s hard to gain perspective or gauge our speed. The single white house that clings to the loch’s edge by the mouth of the bay gets neither closer nor further away. The waves, once black messy humps, folding over themselves with a white-spittle foam, driven by the wind become black horses’ heads. They gallop towards us with bubbling manes, tossing and bouncing us from their liquid flanks. They break without warning too, exploding underneath us or collapsing meekly as we get ready to ride them. Up and down, lifted and dropped. I’m quite surprised I don’t feel sick; maybe I have finally found my sea legs in the centre of Scotland.

Loch Lochy is said to mean Loch of the Dark Goddess.According to legend it is home to a kelpie, a river horse that crept from the lake and assumed an equine shape to graze on the shore. Known here as Lord of the Lake or the Water King, when disturbed he would plunge back into the water. His power was said to be so great that he could shake the universe, his movements being both awesome and destructive, overturning boats and enticing mares and children to their deaths. Perhaps it is he, not the fault line, which caused the towns around the Great Glens to shake.” Matt is a writer, journalist and naturalist who lives in Bury St Edmunds. His work has been published in the Telegraph, the Guardian and the Times. He works with the Suffolk Wildlife Trust, edits Suffolk Wildlife and writes a monthly country diary for the Suffolk Magazine.

The Pull of the River is his first book. He is at work on a second.