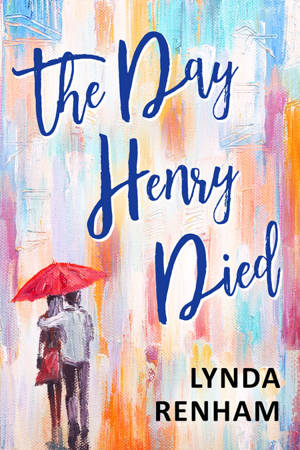 I’m delighted to be able to share an extract from Lynda Renham’s new book today. The Day Henry Died is available now in ebook and paperback.

Suppose you wake up one morning to find yourself dead. You can see yourself clearly in the mirror, and feel the same as you did the day before. But today is the day of your funeral. What do you do?

This was Henry’s dilemma. Henry decides he can’t possibly be dead, so he sets out to prove he is alive. Then, he discovers that Rita, a product demonstrator at the supermarket, can see him.

Even with the help of Rita, proving you’re not dead was harder than Henry imagined, but when Henry discovered that he was murdered, the question was why and by whom?

‘His breakfast ready, Henry sat contentedly at the small kitchen table with its blue and white jug of freesias and turned to the obituary page. The aroma of the freshly made coffee reached his grateful nostrils and Henry sighed with pleasure. He glanced up at the ceiling and was relieved to see there was no longer a water stain. Jim had done a good job. He reminded himself to look at the roof on his way out. Always good to check, thought Henry. After all, he’d paid a pretty penny to have it repaired. Good roofers were hard to come by. He and Imogen had been lucky finding Jim. Not that Henry had had much to do with Jim. He’d left all that to Imogen. After all, she was home most of the time. The greengrocer job wasn’t a demanding one, not like Henry’s. He didn’t mind Imogen working three days a week. After all, it gave her the money to buy those little things she enjoyed, like make-up and face creams. Recently she had bought a set of lace runners. Henry didn’t care for the lace runners much, but he suffered them for Imogen’s sake. They pleased her and, after all, it was her house too. No, three days a week was fine, Henry had decided. He’d not wanted her to apply for the manager’s job. He’d rather wished Alice had not even mentioned it. That would not only have been full-time but a big commitment and would most certainly have affected their time together. The last thing Henry wanted was to come home to TV dinners like many of the men he worked with. No, there was no need for Imogen to work full-time. He earned a good salary and they had everything they needed. He liked Imogen to be in the house when he got home and to be greeted with the aroma of something tasty cooking in the oven.

A spoonful of porridge laced with honey was poised to enter his mouth when Henry uncharacteristically dropped the spoon with a clatter back into the bowl, sending bits of blueberry-tinted porridge across the well-scrubbed table. Henry’s eyes scanned the words in front of him, his brain struggling to comprehend what it was seeing. This couldn’t be right. He blinked and removed his glasses, rubbing at them vigorously with a piece of kitchen towel. He replaced the spectacles and read the words again. They hadn’t changed. Henry Booker Frazer was still reading his own obituary.’

What a teaser! Henry sounds like a charming man, doesn’t he?! Lynda Renham is author to many popular romantic comedy and gripping psychological thriller novels. She lives in Oxford, UK. She has appeared on BBC radio discussion programs and is a prolific blogger, Twitter and when not writing can usually be found wasting her time on Facebook.

Lynda lives in Oxfordshire with her second husband and cat.