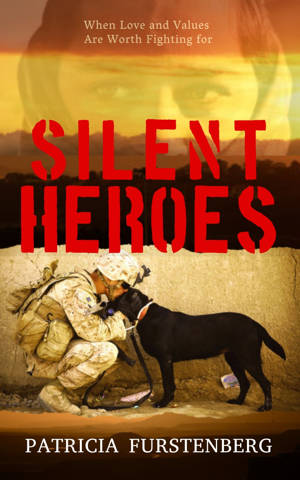 I’m delighted to be featuring Silent Heroes by Patricia Furstenberg on Short Book and Scribes today. It sounds like such a lovely read and I’m so sorry that I’m unable to fit it in at the moment but I do have a fabulous extract to share with you.

Pat is running a charity drive during July and August during which time 50% of all Amazon royalties will be donated to an animal charity. If that’s not a great reason to get yourself a copy then I don’t know what is.

How far would you go to save strangers in need? A group of Marines and their MWD, Military Working Dogs, are about to find out.

When Talibans descends in the village of Nauzad and discover girls can read, a woman accepts the blame. Her teenage daughter witnesses the sacrifice and swears revenge, her life and that of her brother becoming intertwined with those of the US Marines serving at a military base nearby.

But the Taliban is infiltrated everywhere and friends or foes are hard to differentiate. The Marines fight with bravery to protect the civilians and to fend off the Taliban lurking at the ancient Qala-e-Bost fortress, thus protecting Bost Airport, a vital strategic point for the allies.

Faced with questions about the necessity of the war, with the trauma of losing their platoon-mates and the emotional scars of battle, the Marines race against time in one last battle of eradicating the Taliban before it is too late.

The War in Afghanistan is a contemporary, vitally important conflict whose meaning needs to be understood by the public worldwide. ‘Silent Heroes’ is a narrative about the value of life and the necessity of combat; the terror of dying; the ordeal of seeing your loved ones and your platoon-mates killed in front of your eyes; the trauma of taking a human life.

Read about very well trained MWDs, military working dogs, capable of detecting the smallest traces of explosives, working in the extreme weather condition environments, under the stressful battlefield situations that is the War in Afghanistan. Smart and agile, at the end of the day what these dogs are looking forward to is the close bond they developed with their handlers, which call themselves the dog’s partners, brothers, daddies.

They’re coming!” are the words synonym with death.

The war cry sweeps along the eastern snowy slope of Hindu Kush Mountains in an avalanche of hoofs. It conquers the empty streets of our village amplified by dark, bearded men waving Kalashnikovs above their heads, thirsty for blood.

Those who have heard it before know it brings terror and death. Those who have met them before remember the reek of slaughter that seeps through their long robes, the wild beards that swell from underneath their flat hats, pakols, revealing gap-toothed jaws. Even those too young to comprehend, the tots born after the last grown men of our village left for war, shrink from their sight.

The Taliban soldiers breeding in our mountains.

Their sulphur stench yanks us, women and children, from behind the fake safety of mud walls. It is execution time again.

A young woman stood in the door frame of a modest hut, holding herself tall in an attempt to shield her young brother who, transfixed, watched as a cloud of menacing smoke tumbled along the mountain slope, thundering and calling “Allāhu akbar”, “Allah is great.” The same praise women sang, with tear-stained eyes, whenever a healthy new-born arrived into their world.

Her mother still called her ‘girl’, although she already passed the threshold to womanhood. But a girl would still fit in her mother’s arms where she would be protected. A girl would not be expected to obey and cover herself with a burqa and a girl would not be forced to cease her learning because she is over a certain age.

A second woman, with eagle eyes and a guarded attitude, materialized behind. Adjusting her hijab over her head she kept to the shadows, yanking the young one inside. Only her hooded, dark brown eyes spoke. There was distress in them and a prophecy, words no one was allowed to hear.

Between their skirts, a skinny boy of eight moved along. The girl, Emma Dil, meaning ‘Dil ki khawahish’, ‘Heart’s Wish’, was thus named to illustrate her father’s pride in having a girl as their firstborn, instead of a boy. His heart’s wish. The same honour had glinted in their mother’s eyes the night their father decided to join the fight against the Afghan insurgents in the never-ending war versus Taliban; even knowing it might cost them his life.

“Come, my heart, inside. It has to be done. We must hurry, hurry,” the second woman said, her voice in check, yet Emma Dil’s strung nerves picked the rise in pitch, its agony and anguish. The mother pulled Emma indoors bolting the door, sealing out most of the light. A gleam of steel in the mother’s right hand caught the last of the sunshine. Hugging her daughter one last time the mother pulled the little boy between them, her free hand soft and warm on Emma’s wet cheek.

“Rafik, my clever boy, my pride, take your flying legs and run like the wind to the neighbouring village. Warn them,” her eyes urged him, “they’ve come again.” Her work-worn hand lingered on his face, cupping his childish cheek one more time. His eyes gleamed, his body all wired up, ready to please, yet his mother’s hand stayed on his face, drawing him closer for one more kiss. The woman pulled him near her chest while urging him to go at the same time, “run, child, run!”

When he was out through the back door the woman turned dead eyes towards the girl, scissors at the ready. “Swear, my girl. No one must ever find out.” Patricia Furstenberg is a multi-genre author, poetess and mother. With a medical degree behind her, Patricia is passionate about mind, brain and education and the psychology behind it.

“Silent Heroes” is her 13th book and her first work of adult fiction. Like in many of her previous writings Patricia found herself gravitating towards dogs and war themes. How far human sacrifice goes? Whose truly are the spoils-of-war?

Besides her books, Patricia blogs extensively and writes for various online journals. When she’s not writing or plays “mama-taxi” she loves reading, researching for forthcoming books and traveling with her family. She never counts how many cups of coffee she finishes in a day. Patricia lives happily with her husband, children and dogs in sunny South Africa.