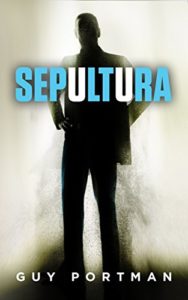 I’m delighted to be sharing a couple of short extracts with you today from Sepultura by Guy Portman. It sounds like a fascinating and dark read and I’m sorry that I have not been able to read it, but I hope to tempt you with it instead!

So what’s Sepultura all about?

A sociopath can only keep up a façade for so long.

Dyson Devereux is a busy man, with a challenging new job at Paleham Council and a young son. He would be coping just fine were it not for crass colleagues, banal bureaucracy and contemptible clothes. He is not going to take it lying down.

Because beneath Dyson’s charming, Italian delicacy-consuming veneer lurks something sinister. As his personal and professional lives threaten to spiral out of control, will Dyson’s true nature be revealed?

Compulsive and brimming with satirical wit, Sepultura is a caustic black comedy featuring an unforgettable sociopath.

The ebook will be available from 11th January 2018.

These extracts are from different parts of the book and really give a flavour of the writing style.

Monday morning – After discarding two pamphlets advertising tacky funeral programme cards, I peruse a brochure from a local gravestone manufacturer. Having decided that the company’s creations are fit for public consumption, I hand the brochure to Sullen Goth with instructions to add their details to the database.

The next item needing my attention is a draft letter to the Scully family, one of whose number resides in Cressingham Park Cemetery. His gravestone was torn down on the orders of Health and Safety, for no other reason than it was tilting seven degrees to one side more than their irksome requirements permit. The living Scullys are less than impressed. My assistant’s letter exonerates Burials and Cemeteries of any responsibility whilst at the same time offering assistance with the choosing and erecting of an appropriate replacement. Having signed the letter I say, ‘Flawless; keep up the good work.’

‘Cool. Hey boss, check these out.’ Sullen Goth pulls up a trouser leg, revealing a brown sock with blue polka dots. ‘What do you think of the socks?’

From this moment forth my assistant will be known as Goth Exonerated. My office telephone is ringing. I pick it up.

Back in Burials and Cemeteries all is quiet, as it should be in a department dedicated to the dead. There is an inter-departmental meeting going on downstairs, and a considerable number of the council workers from this floor are in attendance. My assistant places a paper cup containing a caffè latte extra hot with soya milk on my desk. He hands me some coins, says, ‘Here’s your change.’

‘Thank you. What is that you got there?’

‘You will come around to caffè latte extra hot with soya milk in due course.’

‘You did not get much of a lunch break. Take five.’

Goth Exonerated picks up a newspaper from his desk and walks off, leaving me in Burials and Cemeteries with my keepsake for company.

As far back as anyone can remember Guy has been an introverted creature, with an insatiable appetite for knowledge, and a sardonic sense of humour.

Throughout a childhood in London spent watching cold war propaganda gems such as He Man, an adolescence confined in various institutions, and a career that has encompassed stints in academic research and the sports industry, Guy has been a keen if somewhat cynical social observer.

Humour of the sardonic variety is a recurring theme in Guy’s writing. The protagonist in his fourth novel, the black comedy Sepultura, is, like the author, a darkly humorous individual – though, unlike the author, he is a psychopath.
Guy is a dedicated blogger and an avid reader.
Twitter
Website