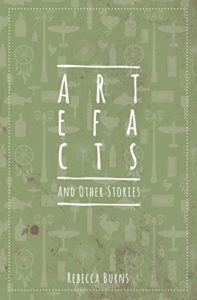 #extract – Artefacts and Other Stories by Rebecca Burns @Bekki66

I’m so pleased to be welcoming Rebecca Burns to Short Book and Scribes today. Rebecca is the author of Artefacts and Other Stories, a short story collection. I’m going to be sharing an extract from one of them but first here’s a little more about the collection.

That dandelion. A flash of stubborn yellow in a dark box of space. It had promised sunshine but had tasted sour.
Artefacts.
A dandelion. A mayfly. A family, bereft.
Items and mementos of a life, lived hard and with love, or long, empty, bitter.
In these sharply drawn and unflinching short stories, Rebecca Burns unpicks the connection between the lives we live and what we leave behind.

From the story, Mayflies of Apollo

Daphne heard about the mayflies on the TV and didn’t stop to think if she needed to pack for an overnight stay or to cancel plans for the weekend – she simply picked up her purse, locked the apartment, and drove west on Route 6. It was the kind of impulsive act that Penn had adored in the early days and later come to hate. But he wasn’t here; he was a confirmed lowlife and an adulterer to boot and was probably now sinking under the weight of soiled diapers and sour day-old bottles of formula. It served him right. She hummed to herself as she made the turn towards the township of Apollo, where the TV said the mayflies were.

She liked that they were at Apollo. The newscaster, with her frighteningly white teeth, had done her piece to camera from the town on the coast of Lake Erie, swatting aside mayflies as they skirted about her with biblical intent. Daphne had been transfixed. She wanted one of the winged beasts to crash into the news reporter’s horrendous, brilliant mouth. But of course that didn’t happen. Daphne had been thinking that the reporter looked a little like Penn’s new wife, the fertile one, when she heard the name of the town. Apollo. It was the kind of coincidence she loved, the kind that had – before Penn – seen her book a flight to Phuket or hop aboard the Trans Siberian Express simply because a man she met in Moscow knew all the words to “American Pie”. Daphne had just had a new tattoo in the shape of Apollo’s harp. Penn would have detested it. Screw him, she thought, throwing her coffee in the sink and switching off the TV. I’m off to see the mayflies.

The news reporter had said it was dangerous – dangerous! – to wear white, for the mayflies flocked to the hapless bearer of such disturbing fabric and smothered them quickly. Well, not exactly smothered, laughed the Channel Six lady, giggling again and showing her teeth and doing that cute rabbit thing with her nose that made Daphne want to reach into the TV set and pull it off. But it certainly wasn’t advised to wear a white blouse! Daphne saw plenty of people in white shirts, though, when she swung her car into a tiny space on the Apollo foreshore beside Tommy’s Crab Shack. And they were all covered with flying insects.

It had taken two hours to get here from Cleveland. She looked out at the water of Lake Erie, lying contentedly in the evening warmth, the surface thick and still. It reminded Daphne of fudge, the kind her grandmother ate on Sunday afternoons while instructing her granddaughter to rub her feet. Daphne shuddered and got out of the car. There they were – clouds of black-bodied mayflies, rising as one over the water. The mass moved and changed shape, converging and separating, like the lava lamp a boyfriend had in his Hong Kong apartment; Daphne had been tripping on acid one evening and spent four hours with her face pressed up to the glass as lava melded, fell apart, and then became whole again. The swarm of mayflies kept its shape for the most part, small fragments falling away and then becoming swallowed up by the greater part. Daphne breathed deeply, welcome peace lying like balm across her chest. She forgot about Penn. She just watched.

Thank you to Rebecca for this enticing extract. Artefacts and Other Stories is available now in ebook and paperback. Rebecca Burns is an award-winning writer of short stories, over thirty of which have been published online or in print. Her short story collections – (2012) and (2014) were both longlisted for the Edge Hill Short Story Award. Her debut novel, The Bishop’s Girl, was published in 2016. She was nominated for a Pushcart Prize in 2011, winner of the Fowey Festival of Words and Music Short Story Competition in 2013 (and runner-up in 2014), winner of the Black Pear Press Short Story Competition in 2014, and has been listed for competitions including the Evesham Festival of Words and Music, the Chipping Norton Festival, the Sunderland Short Story Award, and the Green Lady Press Short Story Award. She has also been profiled as part of the University of Leicester’s “Grassroutes Project”, a project that showcases the 50 best transcultural writers in the county.